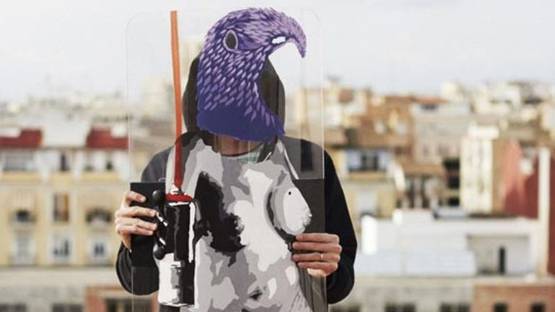 Vinz is a Spanish artist who uses a multi-step process to create his unique imagery and to expose ideas that are grounded in our social, political and global environment. Vinz was born 1979 in Valencia, Spain where he received his BFA in 2003 from Universidad Politécnica. The first piece Vinz ever did was a wheatpaste of a nude man squatting with his eyes looking the viewer which he pasted on the wall of an abandoned lot where should be a school.

In 2011, Vinz began applying series of work—the Feel Free project—to the walls of his native Valencia and other European cities. He first photographs nude models, either isolated or orchestrated in small groups. He then paints animal heads onto large-scale prints of the human figures, creating hybrid subjects with a system of symbols attached to various species. Taking a more delicate approach to his studio work, Vinz collages paper ephemera into a background texture, as a base to print the figures onto, before painting details in enamel or gouache. Birds signify freedom, fish represent consumerism, and frogs convey authority and lizards represent oppression.

“Who I am is not important. I think the really interesting thing is the message of my work, not the messenger.”

Vinz Feel Free’s large scale wheat paste street art installations where nude women’s heads are replaced with bird heads and the heads of business men are altered to look like reptiles. In Vinz’s words. “Birds and naked people are extracted from the book of Genesis in the Bible. Mayas, Aztechs, Sumerians etc. talk about the figure of reptile as the animals which take control over us, like police in our world. And the frog appears in Apocalypse scenes and is responsible for Humanity disasters. This is why I use them to build men in suit characters.”

His exhibition “Batalla” features a series of mixed media collage works, paintings and sculptures. The central theme is a rebellion against governmental, corporate or religious impositions placed upon society to establish social order at the expense of personal freedom.

Naked bodies of all shapes and sizes are meant to question our beliefs in freedom and the reptilian hybrids represent the repressive and often violent police presence throughout the world. The "Suited Reptilians" represent the businessmen and bankers who rule the world we live in today. The images that Vinz uses come from photos that he personally took of police violence during protests in his home country of Spain.

“Personal freedom ends when another one begins. It is very difficult to perform acts of freedom without bothering anyone, so, up to what point my freedom reaches? I think from my skin to inside, I rule.” - Vinz