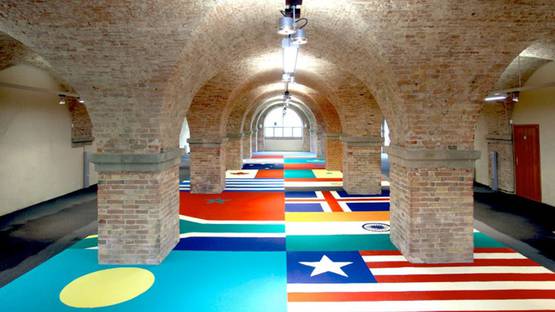 There is something truly peaceful and soothing in letting our gaze flow across the landscape; both breathtaking and calming at the same time, it evokes a presence of mind and connects one with memories and history of the place. “The landscape is the end of the gaze. It’s where the gaze goes to die,” said the Italian artist Vittorio Corsini, as his artistic practice is turned towards sculptures and installations inhabiting public places and essentially giving a tour of the local area. The landscape becomes a part of his works, as the viewer combines the impact of both the placed artistic piece and the surroundings.

Walking Down the Memory Lane

There’s more to the landscape than meets the eye, and Corsini’s public installations are often set to reveal what lies beneath the physical realm. Going back to natural shapes, he uses various materials like steel and blown glass, as well as everyday objects in constructing bodies of only essential outlines, emphasizing the fragility or toughness of the material. Focused on what permeates the lives of people in an area, he instills his pieces with the history and memories of the very inhabitants of the place he builds his installations in. His Who's talking? public art in Luicciana, Italy, is a good example of his practice; combining a street lamp and a seat, Corsini created a spot where people can admire the beautiful landscape surrounding them, while listening to the tales distinctly tied to the small town. The stories told by the inhabitants of Luicciana were previously recorded on the artist’s initiation, and playing them on the streetlamp’s loudspeaker system allows the viewers to connect with the environment.

More than just the landscape, Vittorio Corsini’s work depicts home in many of his pieces as another aspect of daily life and its dynamic. Carrying on the relationship with the world from his outdoors installations and sculptures, living space becomes a place in which the individuals recognize each other, existing and passing through the same space. Much like with the landscapes, a close relationship is formed between the inhabitants of the closed area, in this case a home, connecting memories of the individuals with the current physical realm. His recent works also represent places of worship, merging architecture and symbolism as the internal space is represented only by its ground plans, furthering the link between community's spirit and social form.

With over twenty years of artistic creation behind him, Vittorio Corsini was born in 1956 and has made some astonishing works both for outdoors and exhibition display. His pieces have been exhibited widely across Italy and Europe, placing urban works since the nineties in courtyards, gardens, squares, as well as finding their way to museums and collections. His approach to the concept of living and sharing a connection with the environment and its history has given us some truly amazing public installations, allowing us to see the landscape as he does: not just as a physical territory, but as a place of memories and shared experiences.