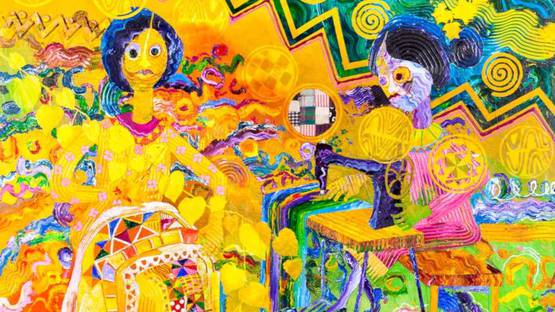 The African-American artist Wadsworth Aikens Jarrell came to prominence during the mid-1960s after attending the Art Institute of Chicago and becoming active in the local art scene as a socially engaged practitioner interested in racial issues. Gradually he became affiliated with the Organization of Black American Culture (OBAC), an initiative that enforced what a couple of years later became the Black arts movement. Together with his wife, Jarrell ran the WJ Studio and Gallery in the late 1960s, which hosted regional artists and musicians, and in 1969, the artist co-founded an internationally relevant and politically charged formation called AFRICOBRA: African Commune of Bad Relevant Artists.

The course of his art shifted in the late 1970s after he visited Africa and became fascinated with the Senufo people of Ivory Coast, Mali, and Burkina Faso. During those years, Jarrell taught at the University of Georgia and embraced a new technique by using a bricklayer's trowel on his canvases.

By fusing figuration and abstraction in regards to the everyday African American experience and the rich legacy of African culture, the artist developed an authentic language expressed through his paintings, sculptures, and prints, with some being held in both the public and private collections.