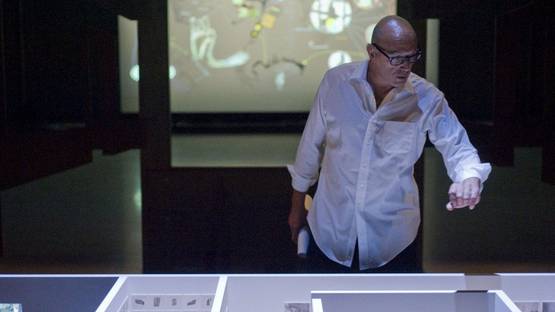 The Middle East’s art scene in an almost continual state of chaos and contradiction, halfway amidst collapse and rebirth. Thanks to its geographical position at the crossroads of the Mediterranean Basin and the Arabian hinterland, Lebanon, officially the Lebanese Republic, acts as a gateway to the region. Despite of the permanent threats of violence it appears that the Lebanese art scene remains dynamic. One of Lebanon's most prominent artists is Walid Raad (Ra'ad) who works in video, installation, photography, performance and literary essays dealing with the contemporary history and cultural identity of his naïve country.

The famous artist was born in 1967, eight years before a multifaceted civil war in Lebanon that lasted from 1975 to 1990 and resulted in huge loss of human life and property. The years Walid lived surrounded by war became the main inspiration for his later work. The artist had to leave Beirut as a teenager in 1983 as the conflict between opposing factions became increasingly heated. He studied in the United States, focusing on photography and Middle Eastern studies at the Rochester Institute of Technology. Additionally, he earned his MA and Ph.D. in the Visual and Cultural Studies at the University of Rochester.

Always dedicated, Raad has spent over two decades creating a unique body of work the offers multi-layered narratives on the recent history of Lebanon. His most famous work is The Atlas Group (1989-2004), a fictional foundation dedicated to researching and documenting Lebanon’s recent past. The artist took a serious and systematic approach to the accumulation of fictionalized works related to Lebanon’s recent history with an emphasis on country’s fifteen years of civil war. The Atlas Group explored the social, political, psychological and aesthetic consequences caused by the wars Lebanon had been involved in, and initiated many discussions about themes like experience and memory, authenticity and authorship, and how the perception of history can be changed.

Raad's work engages with Lebanese history, with an emphasis on country’s fifteen years of civil war

Scratching on Things I Could Disavow

In the past several years, Walid has worked on a project called Scratching on Things I Could Disavow: A History of Art in the Arab World. Fascinated by the cultural developments in such cities as Abu Dhabi, Beirut, Cairo, Doha and Istanbul, Raad takes a critical look at the increasing enthusiasm for heritage and contemporary art in those cities and in Arab world in general, and explores the role of capitalism and globalization in dynamic program of investment in arts and cultural infrastructure.

Walid Raad is one of the founding members of The Gulf Labor Coalition or Gulf Labor, an organization composed of international artists working to ensure that migrant worker rights are protected during the construction of iconic cultural institutions on Saadiyat Island located near the coast of Abu Dhabi in the UAE.

The work by Wallid Raad has been on display in many prestigious museums and galleries around the globe. His solo exhibitions were held at the Museum of Modern Art in New York; the Museo MADRE, Napoli, Italy; the Louvre, Paris, France; the Nicolas Ibrahim Sursock Museum, Beirut, Lebanon; and the Musée d'art contemporain, Nîmes, France, to name a few.

He has received a considerable number of awards for his work including Hasselblad Award (2011) granted to a photographer recognized for major achievements, Alpert Award for Visual Arts from the Herb Alpert Foundation in 2007, and the First Prize at the Onion City Experimental Film and Video Festival in 2002, among others.

The artist is a member of the Arab Image Foundation, an organization established in Beirut in 1997 responsible for tracking down, collecting, preserving and studying photographs from the Middle East, North Africa and the Arab diaspora. He published several books including Walid Raad (2015) and Walid Raad: I Might Die Before I Get a Rifle, Hasselblad Award 2011 (2012).

Hailing from the small country involved in a bloody civil conflict, Walid Raad managed to draw attention to his art thanks to his vast, almost unimaginable talent. Over thirty years after he moved to the United States and found his place at the contemporary art scene, he continues to draw endless inspiration from his native country and the war he witnessed in his youth.

Amongst art career, he began a university teaching career in 1991 and is currently an Associate Professor at the School of Art at the Cooper Union, New York.

The artist is represented by Weng Contemporary.

Featured image: photo credits © News of the Art World
All images used for illustrative purposes only