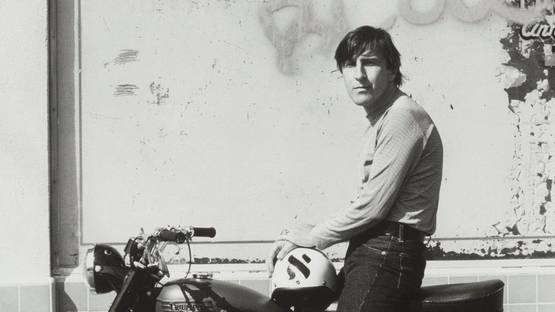 Often introduced as the father of assemblage, Wallace Berman was an American visual artist regarded as a crucial, but often overlooked figure in the Post-World War II California scene. Besides being a successful visual artist, Wallace was also an active member of the American jazz scene, which allowed him opportunities to work with many popular musicians, most of whom wanted Berman to create their album covers. He was heavily influenced by the concepts of Dada and Surrealism, as well as Kabbalah, a mysterious art movement with its roots in Jewish tradition. Due to his conflicting nature when dealing with the public opinions, Berman's work is often disregarded by many art historians who put value on more formal visuals than the one Wallace was interested into making.

Wallace Berman was born in Staten Island, New York, during the year of 1926. When he was about the age of four, his family moved to Boyle Heights, ending up at a diametrically opposite location of the Big Apple. Berman was discharged from high school for gambling in the early 1940s and eventually became associated with the West Coast jazz scene that was redefining many norms of the time - Wallace actually wrote a song with Jimmy Witherspoon in his time. He did manage to start attending classes at Jepson Art Institute and Chouinard Art Institute, whilst he worked in a furniture factory for extra cash. It was at this wood factory where he began creating sculptures, mostly from leftovers and scraps - this led to him becoming an artist by the early 1950s. In the year of 1957, Berman moved from Los Angeles to San Francisco, getting himself involved with the magazine Semina which consisted of poetry, photographs, texts, drawings and images assembled exclusively by Wallace. Around the year of 1957, Berman held his first exhibition at the newly opened Ferus Gallery in Los Angeles. In 1961, he came back to L.A. and started creating his series of Verifax Collages in 1963 or 1964. This project was based on photocopies of Kodak images from magazines and newspapers mounted onto a flat surface in a collage fashion with details made from acrylic paint. This series was strongly influenced by the aforementioned Kabbalah - Breman's fascination with this Jewish visual form is also evident in his later inscriptions in-situ in Hebrew letters and his only film, Aleph, a silent movie that explores topics of life, death, politics and pop culture. Eventually, Wallace started to stay clear of gallery spaces and focused on private series and projects, as well as his favorite magazine Semina, claiming that good public exhibitions of arts are too restrictive and censured for modern times. Semina was being published until the year of 1964, after which Wallace lost interest and wanted new challenges.

Mostly publishing his untitled artworks through the magazine Semina until the year of 1964, Wallace Berman kept an extremely low profile

Wallace Berman was highly active and produced many artworks until the fatal year of 1976 when he died in a car accident caused by a drunk driver. An interesting legend surrounds Berman's name to this day. Allegedly, he told his mother as a child that he would die on his 50th birthday - and he really did die on February 18, 1976. Ending his life with a terrifyingly mystical event, Berman's career ended the same way it went down for the most of its duration - quick, unique and explosive. Since Walalce mostly spread his art with friends and close associates, not many of his works are as well documented and treated like the untitled Verifax works, which only contributes to the lack of appreciation for Berman's art.