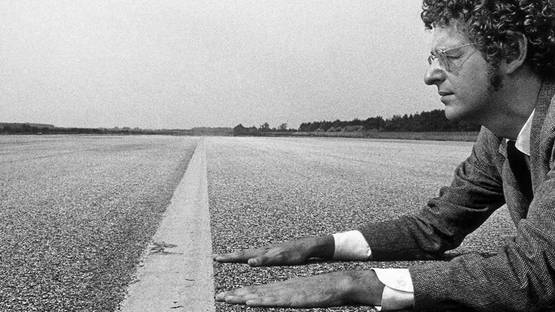 Walter De Maria never regretted the decision to forsake a music career in a band The Primitives (that will be known as The Velvet Underground), dedicating himself almost entirely to a different kind of art. We might never know the proportions of his promising career in the music industry, but the fact is that the art scene of the 60s and 70s was heavily marked by his enigmatic installations connected with Minimal, Conceptual, and Land art. Still the role model for the generations of the musical avant-garde that studied his intensely minimalist and conceptualist approach to making sound, this American artist made even larger impact by connecting multiple movements of visual artistic practice through his interactive sculptural installations and bridging the viewer and nature by either importing visual elements in nature itself, or by transferring its structural parts into the gallery spaces.

De Maria was born in 1935, in Albany, California, near San Francisco, where his Italian-American family owned a local restaurant. As a boy, he was highly interested in music, one could say he was under Euterpe’s spell. At first, he played the piano, but gave up pretty soon, realizing that this instrument just wasn’t his cup of tea. He moved on to drums, taking private lessons. When he was only 16, he joined a Musicians’ Union, and everything indicated that it’s going to be one long love relationship between the artist and music. However, in 1957 he graduated history and art at the University of California, Berkeley. After two years, he also earned his MFA in painting. At the time, music was still pretty important to the artist – he even occasionally performed in a jazz group of his painting professor David Park, who was also a musician. Upon his graduation, he moved to San Francisco, entering very quickly to its cross-disciplinary avant-garde. This is when De Maria, an educated painter, changed his artistic itinerary, heading towards sculptures and using other media. He began participating and initializing so-called happenings while exploring a three-dimensional and interactive art. His friendship with the avant-garde composer La Monte Young dates back to this period of his’s life. Together with choreographer Simone Forti, La Monte directed the artist towards Minimalism and the viewer-interactive sculptures. One of the pieces he created in 1961 was a work titled Boxes for Meaningless Work, which would come with the instructions: “Transfer things from one box to the next box back and forth, back and forth, etc. Be aware that what you are doing is meaningless!”

De Maria moved to New York in 1960. In the beginning of his New York life, he was writing conceptual pieces on art. He also participated in multimedia presentations he named Theater Pieces together with La Monte Young. He even composed two musical pieces – one titled Cricket Music in 1964 and the other Ocean Music in 1968. Next year, the artist produced two films: Three Circles and Two Lines in the Desert; Hardcore. New York also opened its music scene door to the artist who was a drummer in the band The Primitives, which will evolve to Lou Reed’s The Velvet Underground in the years to come. Very enthusiastic at the beginning, De Maria soon got tired and bored of dragging his drums around different bars and clubs: “I said to myself, do I want to go to rehearsal every day and every night, you know, take all these drugs?” Very quickly upon his leaving the band, The Velvet Underground was discovered and reinvented by Andy Warhol.

The year of 1963 was highly important for the artist. Robert Whitman and De Maria opened the 9 Great Jones Street gallery in New York. After a while, he held his first solo exhibition in this gallery. In 1965, he began to make sculptures in metal, encouraged by a strong support he received from Robert C. Scull, a taxi tycoon and the owner of a famous collection of Pop and Minimal art in the 60’s. Very fast, he became completely fascinated by industrially manufactured materials such as aluminum or steel. In 1968, he found a new passion. During this time, he made himself a key figure of the Earthworks movement (for example, a slow process of erosion or the movement of planets and stars). This movement originated from artists’ appetite to understand the processes of nature and to somehow control them. So for the occasion – he filled with dirt the Galerie Heiner Friedrich in Munich. During the late 60s and through the 70s he gave rein to his imagination, creating large-scale outdoor works, typically defined by some rather strange ideas. The Lightning Field made in 1977 in western New Mexico is De Maria’s most famous work. Almost 400 stainless steel posts arranged in a calculated grid, covering the surface of 1 mile per 1 km. This piece and its optical effects depended on the time of the day and the weather change – for instance, it would light up during thunderstorms.

Even though De Maria is best known for this type of installations dating back to the 70s, decades that would come didn’t harm his position in the artistic world. A great number of his exhibitions proved (over and over again) that the interest for his work does not get any colder – in fact, in 1989 the Assemblée Nationale in Paris chose to commission the artist to create their bicentenary celebration art piece. He chose to present a sphere of polished granite for this occasion – something comparable with a sculpture Large Red Sphere from 2002, weighing 25 tons and installed in the Türkentor, Munich. Walter de Maria died in 2013, on his way to his mother’s 100 birthday. Not only that he strongly influenced his peers and later generations of artists, his work also moved the boundaries of public sculpture helping establishing Earthworks and Land Art as important creative expressions of contemporary art. In accordance to this, he is also credited for accepting the fact that people can view collections not only at a particular museum location but also at more unusual places. In 2015 a movie titled Troublemakers: The Story of Land Art came out. This story was produced and directed by a filmmaker and art historian James Crump. The movie reveals to the public some rare footage of De Maria and his extant and non-extant works.