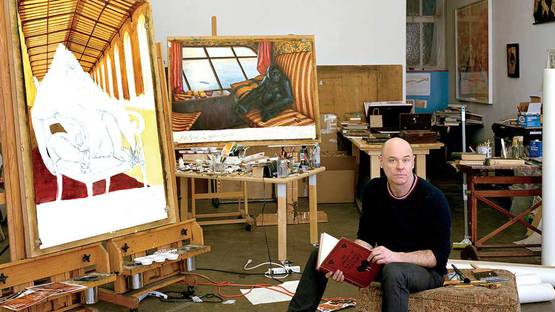 Walton Ford is an American painter, known for depicting wildlife in his monumental paintings. His watercolor pieces have a double meaning that connects nature with historical events and leave sociopolitical commentary. His art expresses the unbreakable relation between the humans and the animal world. His works can be described as allegories, which means that viewers can only see the surface of the pieces, but it takes more attention and commitment to understanding the hidden messages that unfold after a period of time. The final products are the realization of the new speculative ideas that emerge in artist’s imagination throughout the process of creation. Ford style is considered to be provocative with roots in scientific literature. Walton’s prints belong to the naturalist illustrations that often show extinct species. Through the exploration of flora and fauna, he applies cultural criticism and humor on colonialism and industrialism, by using symbols, clues, and jokes. Ford’s paintings combine the parallel and the real universe, the usual and the surreal, the long gone and highly threatened natural world.

The artist was born in 1960 in Larchmont, New York. Since his childhood he was into art, so he started to draw with his elder brother Enfield. As a teenager, he depicted his fears on paper, being influenced by the ‘underground cartoons’ of the sixties, and Robert Crumb’s artworks, including ZAP. The first touch with nature and animals Ford had while visiting deep forests of Canada together with his father. He absorbs information and myths from archives, anthropology, and science, where he finds anecdotes, texts, and prints that he uses as a basis for the inspiration, to which he adds his imagination, and personal touch. The strategy of incorporating naturalist style in his paintings is inspired by the artworks of Dürer, Antoine-Louis Barye, Edward Lear, John James Audubon, and other artists from the Naturalist Illustration Movement/ like Karl Bodmer and George Catlin. This decision has allowed his pieces of the wildlife to have an important place in contemporary art. Walton’s intention was to be a filmmaker so he studied Fine Arts at the Rhode Island School of Design, in Providence, and earned a BFA degree in 1982.

Animals as the Central Theme of His Art

The complex narrative that the author uses, serves to show the way in which people treat animals, and the role they have in our lives. Although humans cannot be seen in his prints, it seems that there is always an omnipresent shadow of them in every animal, scene, character, and imagery that Walton creates. Ford uses a dichotomy, attraction, and repulsion, to represent some sort of interior monologue that combines beautiful and horrible experiences. The humorous element of his paintings is applied through satire and parody. Painter’s descriptive style reminds of the 16th, 17th, and 18th-century art, reinterpreting pieces that were made during British colonialism. Through the use of monkeys, rabbits, birds and tigers, Walton tries to subvert the meaning of the traditional narrative forms seen in natural history paintings, and give his personal contribution to the preservation of the environment. The watercolors and etchings emphasize darker stories behind the images, revealing the violence and blood conquest, characteristic for the intersection between the human culture and animals, defined by those who hunt, and those who are haunted.

Painter’s descriptive style reminds of the 16th, 17th, and 18th century art, reinterpreting pieces that were made during British colonialism

Honors and Shows Around the World

Ford admits that his paintings of animals are activated by the presence of the human. The mix of human emotions and drama in his portraits unravels the mystery that stands between people and nature. He received several national awards, among which are a fellowship from the John Simon Guggenheim Memorial Foundation and the National Endowment for the Arts. In 2010, the retrospective Walton Ford: Bestiarium traveled from the Hamburger Bahnhof Museum Fur Gegenwart in Berlin, to the Albertina in Vienna, finishing at the Louisiana Museum of Modern Art in Denmark in 2011. His new works can be seen in Pancha Tantra book. Apart from these, his new paintings cover the walls of many other galleries and museums around the world.