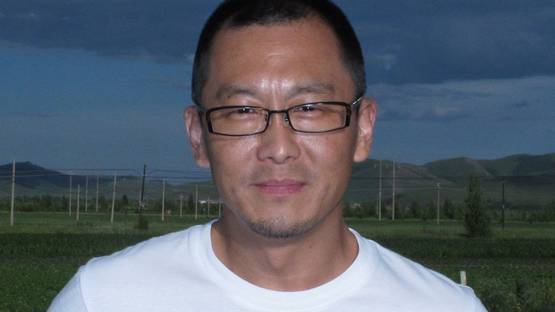 Wang Chuan is a Chinese photographer, known for his photography that captures China’s modern society, and it’s recent economic expansion and transition.

Wang approaches photography like a painter. Rather than conceiving his photography as a decisive instant, Wang Chuan’s work is the result of patient contemplation on the composition that in the end creates a unique universe. His research and practice draws from the tradition of street photography, and its ability to track Chinese tradition despite the onslaught of construction and demolition of once-preserved sites. His focus as a photographer lies in recording what remains within the gap between these shifting landscapes. Wang uses pixels and contemporary digital photo techniques to capture the fleeting evidence of ‘the old China’ still present despite the race to modernize.

His early black and white Awakening series demonstrates cosmopolitan men surrounded by lotus flowers illustrating Wang’s conflict with the rapid change of China’s urban landscape. His recent works are photographic montages illustrating the desires of China’s emerging middle class, set against the destructive element of modernization and loss of nature.

The project named 8 Great Sites of Beijing centers on the historic sites of Beijing, each depicted in one panoramic landscape color photo shot, revealing real places stripped of nostalgia or historical reference. Using digital pixel-comprised imagery, Wang digs beneath the surface of the subject photo, unearthing the fundamental compressed features of Beijing.

Wang Chuan has exhibited his photography in China, the United States, Italy, the United Kingdom, Australia, Austria and in several other countries.

The artist lives and works in Beijing, China.