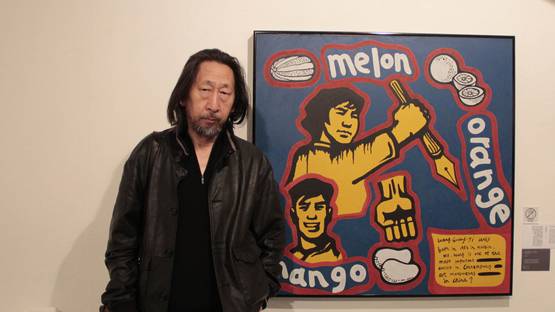 Wang Guangyi is a Chinese artist, born in 1957 in Harbin, Heilongjiang Province. He is known as a leader of the New Art Movement that started in China after 1989. His father was a railway worker in northeastern China. Like many other young people at the time, Wang was also sent to work in rural village. This was common practice at that time in China, as a part of Cultural Revolution. Wang spent three years working in village. He also became a railway worker. Wanting to study art, he tried to get into college. For four years he was unsuccessful, but eventually he enrolled at Zhejiang Academy of Fine Arts. In 1984 he graduated from the oil painting department. In China, his work is considered to be a Political Pop genre, which some think is an error.

In his early works in the mid-1980s, it can be seen that the North Pole is a main and recurring theme. In his art this doesn’t represent geographic location, but it has a symbolic purpose as a place where new faith is born. At this time, when he was creating his Frozen North Pole cycle (1984-1985), he was a part of artistic group known as Artists of the North. After this followed his Post Classical series (1986-1988), in which he worked on a revision of great Western works of art that had themes like religion, morality, faith and ideology. Wang’s most famous cycle of work is the Great Criticism (1990-2007) in which he uses propaganda images of the Cultural Revolution and combines them with Western contemporary logos from advertisements. This cycle ended in 2007, because of the international success for which Wang believed that will compromise the original meaning of the works, as his belief is that political and commercial propaganda are two main forms of brainwashing. In 1990s, he created series and installations VISA (1995-1998), Passport (1994-1995), and Virus Carriers (1996-1998). These feature images of infants, adults, and dogs accompanied by their respective names, places, dates of birth and genders. Titles of these works are imprinted onto these images. These works represent artist's opinion of the relationship that Power has with the individual. This relationship is based on maintaining control over individual by psychological pressure of increasing collective fears and offering itself as a sanctuary from dangers that could suddenly strike. Between Power and individual forms such a relationship in which individual renounces (a part of) freedom, and in exchange receives protection. During the 2000s, Wang created his series titled Materialist (2001-2005). This series contains sculptures made from the images of twelve workers, farmers and soldiers that were taken from propaganda images. In these he tried to express for what he believes is the main force of the people, and that their anger, expressed in their movements, derives from faith in ideology. He emphasizes an image of general feeling of the people while referencing dialectic materialism. The term Materialism is particularly important in Chinese history, because it summarizes beliefs of the socialist ideology. Wang also made cycle called Cold War Aesthetics (2007-2008) that contain historical reconstructions of the Cold War period. In these works he tried to capture and show to the spectator, psychological effects of the propaganda of that era. In his next series of oil paintings, titled New Religion (2011), he represented great political (Lenin, Stalin, Mao) and spiritual (Christ) leaders, as well as the philosophers whose thoughts continues to exert its influence today (Marx and Engels). In this cycle, he asks about commonalities between utopias, fascination they cause in humans, and the need people share, about finding figures to place their faith on.

Wang, like others, has become a millionaire, one of China’s so called nouveau riches. In China, such painters, are called Bopu dashi or Pop masters. His successful career and fast growing wealth have drawn some criticism. Along with the price of his works, some have also questioned his artistic value. Some critics claim that Wang, “has lost his artistic ingenuity, gives in to the market, and has also become dependent on repeating his already successful works”.