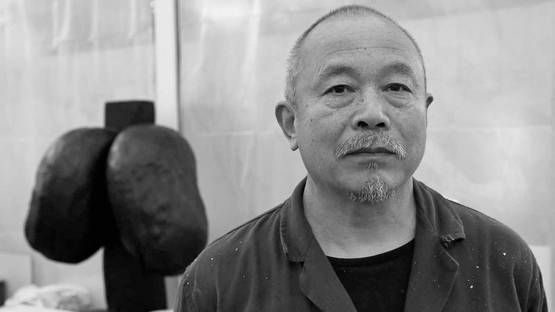 Wang Keping is a Chinese contemporary artist and sculptor known for his unique wooden sculptures, including one that featured a Buddha-like Mao figure, that shocked the art world in Beijing in the late 70s and early 80s.

Born in 1949 in Beijing, Wang Keping was one of the founding member of the first non-conformist artist’s group in China, “The Stars” (1979-1983), together with Huang Rui, Ma Desheng, Li Shuang, Ai Weiwei, setting the stage for avant-garde art in China.

Wang's Wang Keping continues to create these signature sculptures that juxtapose vivid emotion with a marked sense of introversion. Wang is particularly interested in exploring and negotiating the possibilities of rendering the female body. Visually informed by an amalgamation of prehistoric ice-age statuettes and 20th century artists like Constantin Brancusi, he carves heavy thighs, enormous breasts and bulbous buttocks. This eroticism is countered by the solitary tone of these sculptures, as stoic and as subtly abstracted, as is Totem. His figures are of a powerful vividness although they also have a touch of melancholy. Many of the pieces show strangely torn, twisted and distorted shapes. Some seem to have lost limbs, lack eyes or mouths or have over-dimensional genitals. But there are also restrained and subtly abstracted forms in the same vein as Masque or Totem.