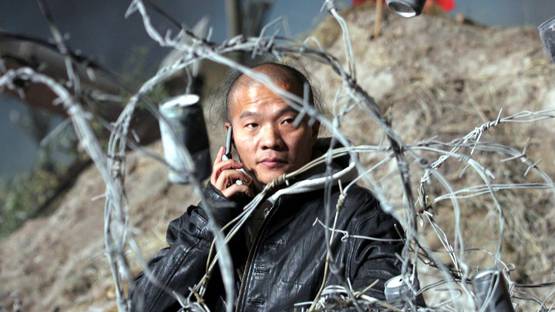 Wang Qingsong is a Chinese photographer best known for his humorous and ironic photographs of consumer culture in China. His works, which sell for tens of thousands of dollars, depend on advanced photographic and printing technology and highlight the absurdities of modern life, but most also contain references to classical Chinese art.

Born in 1966 in Heilongjiang Province, he graduated from the Sichuan Academy of Fine Arts in 1993. By the late 1990s, Wang transitioned from a Gaudy style of painting - a variation of Pop Art - to large-scale color photography that references classical Chinese art.

Like many contemporary Chinese artists, he enlists the fruits of capitalism and consumer culture to proclaim his distaste for both. He uses photographs - staged with actors on film-studio sets, digitally edited, and printed at cinema-screen scale - to register his sardonic response to the changes that have turned China upside-down. As the artist states, ‘All these Western consumer products ‘modernize’ this originally agricultural country. But this trendy, fashionable lifestyle is ridiculous, contradictory and crazy.’

Critical of the proliferation of Western consumerism in China, Wang’s Competition shows the artist standing with a megaphone in front of a city hall covered in advertisements for brands such as Citibank, Starbucks, and Art Basel. Bathhouse shows the artist sitting in a pool surrounded by women, plastic fruit, and Coca-Cola bottles. His 31 foot long photomural from 2000 Night Revels of Lao Li, based on a tenth century scroll painting, depicts a Contemporary Art critic who was fired from an official magazine for supporting Gaudy Art. More recently, Wang has worked in video and performance art, including his Iron Man, which shows fists punching the artist’s face, and symbolizes the endurance of social and personal obstacles.

Wang’s work has been exhibited at many museums and institutions around the world, such as the International Center of Photography in New York, the Shanghai Art Museum, and the Hammer Museum in Los Angeles.

Wang Qingsong lives and works in the capital Beijing.