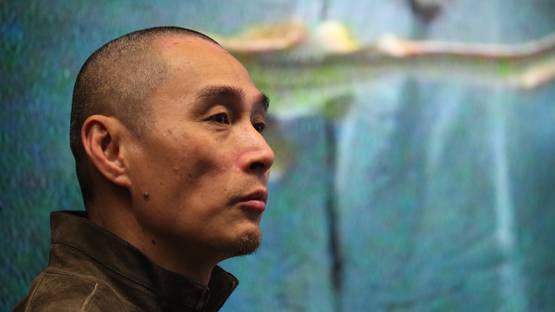 Weng Fen is a Chinese photographer, an active contemporary artist since 1997. He is known for creating works relating to man, nature and urbanization.

Born in 1961, Weng Fen, also known as Weng Peijun, is a native of the Hainan province in China. Weng graduated from Guangzhou Academy of Fine Arts in 1985. The transitional phases and changes in China since its opening up in the 1980's, both physically and emotionally, have been the source of inspiration for Weng Fen and his work.

Weng's epic images focus on the upraising of urbanism in cities such as Haikou, Shanghai and Shenzhen, exemplified in series of images entitled Sitting on the Wall, Bird's Eye View and Staring at The Lake. Subjects portrayed on each of his images start out as outsiders looking into this overwhelming transformation with anticipation, fear and curiosity to being in the center of it all.

In his beguiling photo series titled Sitting on the Wall: Haikou V, the artist captures young women and new cities on the precipice of change. In the images, faceless adolescent girls sit on cement partitions in cities like Hai-kou, Shanghai, and Shenzhen, gazing out toward sleek hi-rises in developing commercial districts. Their backs face us, giving no hint of a personal identity, save for their slightly varied school uniforms. Meanwhile, the booming new buildings dominate the background, their postmodern façades signifying an increase of investment and oncoming changes throughout the city.

This intriguing scene, which is replicated in each of Weng's pictures, highlights the growing divide between disenfranchised urban populations and residents in more central areas, as cities increasingly look toward development to attract capital and the upper classes. The anonymity of these girls feels unnerving - like the city, they are at transitional stages of growth in their lives. The vibrant hues of the new cityscape captivate the viewer and the subject, who at the moment remains static on a steep precipice.

He has contributed to more than 50 exhibitions in China and overseas, generating an international reputation. Weng Fen’s art has been exhibited worldwide in Asia, Europe and America, including the Pompidou Centre in Paris, the San Diego Museum of Art, the Shanghai Art Museum, the Taipei Museum of Contemporary Art, the Mori Museum in Tokyo, the Kunstmuseum Wolfsburg in Germany, the Internation al Centre of Photography in New York and the Singapore Art Museum.

Serving as a Teacher at the Art Collage of Hainan University, Weng Fen lives and works in Hainan.