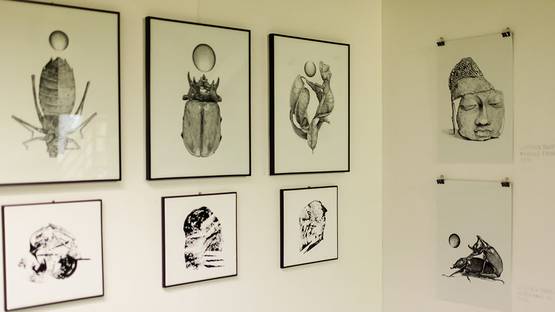 Werther Banfi is an Italian artist whose simplistic black and white style is rooted in pointillism and frottage. His paintings lack any unnecessary details and they concentrate on a pure beauty of different forms. The array of the artist's topics is quite wide –he depicts human faces and bodies, floral motifs, and insects. He has produced two quite different series of works, called The Spheres and The Stains and his first solo exhibition, named Double Sign, which features these series is about to open at Burning Giraffe Art Gallery in Torino on June 16, 2016.

Werther Banfi’s work consists of two series of works with diametrically different techniques, yet clearly related to the same approach. The pieces made in crayon on canvas called The Spheres, are designed with the technique of pointillism. This technique was developed around the end of 19th century as a branch of impressionism and it consists of painting tiny dots of colors which form patterns and images. When it comes to Banfi’s work, they are prevalently detailed and meticulous compositions of black insects on white background. These insects are rendered metaphysical because of the mysterious presence of the spheres that accompany them. With its strictly gray scales, the pointillism technique allows the artist to play with light and with gray tones, creating different effects.

Exploring the Use of Frottage

The Stains series, which is presented for the first time at the Double Sign exhibition , features the artist’s use of frottage. This particular technique is a surrealist method of automatic creative production and it was developed by Max Ernst. In frottage, the artist uses pastels or pencils and rub over an uneven surface. The result can be left just as it is or it can be additionally refined. When it comes to Banfi’s pieces, he doesn’t aim at creating any predetermined shape. He lets his imagination flow free and he paints shapes which are incredibly evocative and play with his viewers’ perception. Banfi makes his viewers perceive something different on his canvas each time they look at it. This approach is somewhat similarly to the Rorschach technique used in psychology.

In frottage, the artist uses pastels or pencils and rub over an uneven surface

Play of Randomness and Order

The entire artistic world of Banfi is inspired by the constant alternation of randomness and rigor of reproduction. He likes both the accidental nature of our world as well as the impulsive creative behavior typical for many artists. Banfi is interested in the meaning of randomness and unpredictability even in the mathematical and geometrical sense. He also implements the famous motto of Gestalt psychology into his art, meaning that the whole is more than the sum of its parts.