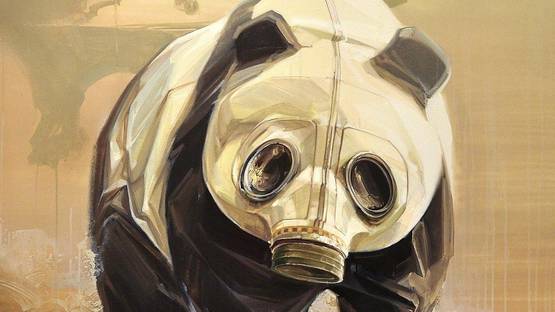 Remo Lienhard, better known under his moniker Wes21, is a young emerging artist from Switzerland. His astonishing and unique works earned him a spot in Shwarzmaller, a collective which comprises several amazing street artists and illustrators. Wes21 is a creative soul who skillfully blends reality and science fiction, nature and industry, humor and serious topics, bold colors and details.

Combining nature and industry in a magnificent way

How do you feel about a spaceship ladybug, or a poignant image of a panda wearing a gas mask? Wes21's imaginative works never fail to leave a strong impression on the viewers. Hybrid and unreal creatures are there to stir your soul and make you think. The young artist doesn't lack imagination. His works are a destructive and conflicting combination of nature and industry, depicting a dystopian future, executed with incredible precision and skill. His street pieces incorporate the surroundings and show Remo's great sense of humor.

The artist was born in Biel, Switzerland in 1989. In 2001, at a very young age, Remo became interested in painting. He fell in love with spray paint and began experimenting, making a name for himself in the local street art scene. He decided to dedicate himself to an art career and enrolled at the College of Design in Biel, eventually becoming a graphic designer. Apart from working as a freelance designer and illustrator, Wes21 likes to spice up his artistic career with murals, works on canvas and 3D sculptures. He often collaborates with Onur.

Wes21 lives and works in Switzerland.