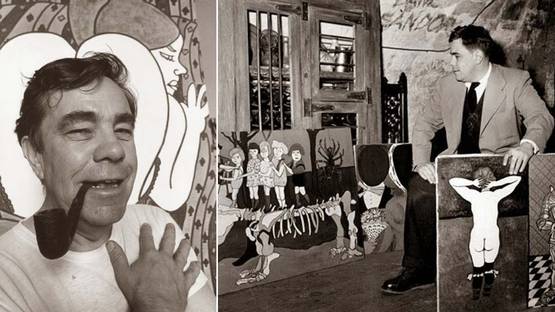 William Copley was an American painter and patron of the arts of some renown whose late Surrealist works have been seen as an early part of the American Pop Art movement of the 1950s and 1960s.

William Nelson Copley, also known as CPLY, was born in New York City in 1919. He was found on the doorstep of the New York Foundling Hospital at the tail end of the Influenza epidemic, which likely killed his parents. In or around 1921 he was adopted by Ira C. and Edith Copley and taken home to Aurora, Illinois. The elder Copley, a utilities magnate, had had several runs for Congress and began purchasing newspapers in Illinois and later in Southern California. A few years after the adoption took place, Edith Copley died and Ira Copley remarried. When Bill was ten years old Copley moved his family to Coronado Island, California just across the bay from San Diego. Bill was a sickly child and missed a lot of school. He read a lot to keep up and was later sent to Phillips Andover and Yale.

As a painter, writer, gallerist, supporter, and publisher, William N. Copley blazed a singular path through numerous territories of post-war art, along the way charting a vital link between the European Surrealist and the American Pop Art movements. Copley didn't enter the art world as a painter, instead, he became a patron to the arts in 1947. At this time, he opened an art gallery in Beverly Hills to display Surrealist Art, after discovering the Surrealist movement on a trip to Mexico. In his gallery, Copley displayed the works of artists including Rene Magritte, Max Ernst, Yves Tanguy, Roberto Matta, Joseph Cornell, and Man Ray. During the single year of the gallery's operation, Copley painted part-time, turning to full-time painting once the galley closed from lack of sales.

After the close of the gallery, the artist moved to Paris. During the 1950s and 1960s, while living and working in Paris, Copley painted a collection of Surrealist work featuring classic American images presented with humorous and ironic undertones. Copley's paintings in this period dealt with ironic and humorous images of stereotypical American symbols like the Western saloon, cowboys, and pin-up girls combined with flags. The first exhibition of his work was in 1951, in Los Angeles at Royer's Book Shop. This exhibition was followed by further showings in New York, Venice, Paris, and London. Copley’s paintings were a combination of the Mexican and American Folk Art with the Modern Surrealist look, creating the early Pop Art look for which he has become noted. In the 1970s, his work continued to evolve, featuring more erotic content. In 1974, Copley exhibited this new line of work, calling the exhibition CPLY X-Rated. Though his new work received little recognition in the United States, it encountered a wider appeal when exhibited in Europe.

His work is collected both in private and public collections worldwide. The work of CPLY has been the subject of numerous single artist shows and a traveling retrospective at the Kunsthalle Bern, Centre Georges Pompidou, and the Stedelijk Van Abbesmuseum, and has been exhibited in several important group exhibitions, including documenta 5 and documenta 7.