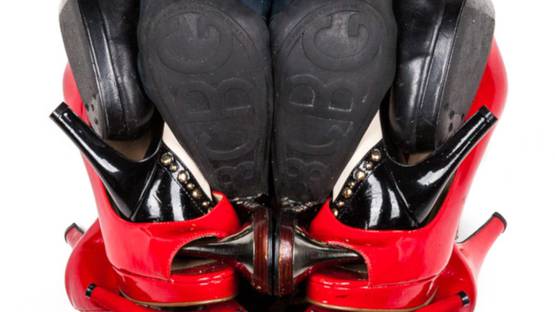 A contemporary American sculptor, printer, and conceptual and visual artist, Willie Cole works in contexts of postmodern eclecticism and combines references from African and African-American imagery. He describes himself as a contemporary artist, perceptual engineer, ecological mechanic, transformer.

Cole is born in 1955 in New Jersey, where he currently lives and works. He attended the Boston University School of Fine Arts, received his Bachelor of Fine Arts degree from the School of Visual Arts in New York in 1976, and continued his studies at the Art Students League of New York from 1976 to 1979. He is the recipient of many awards, including the 2006 David C. Driskell Prize, the first national award to honor and celebrate contributions to the field of African-American art and art history, established by the High Museum of Art in Atlanta, Georgia. His work has been the subject of several one-person museum exhibitions, including those at Montclair Art Museum, University of Wyoming Art Museum, the Tampa Museum of Art, Miami Art Museum, Bronx Museum of the Arts and the Museum of Modern Art, New York.

Working with found household objects, such as steam irons, ironing boards, hairdryers, and high-heeled shoes, he transforms them into powerful sculptures, installations, and works on paper. Drawing from his own African-American heritage, he examines the history of slavery, while celebrating African art and culture. He believes that objects have a memory and history of their own.