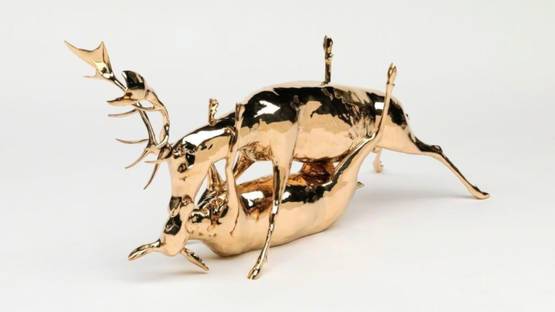 A Belgian Neo-conceptual artist living and working Brighton, UK, Wim Delvoye is known for his inventive and often shocking projects. Much of his work is focused on the human body.

Born 1965 in Wervik, West Flanders, Delvoye was raised in Wervik, a small town in Belgium. Drawn to art from the young age, he attended the Royal Academy of Fine Arts in Ghent. Soon, he began painting over wallpaper and carpets, coloring in the existing patterns. Attracted initially to the theory behind pieces, he considers himself an originator of concepts.

The art critic Robert Enright described Delvoye as "involved in a way of making art that reorients our understanding of how beauty can be created." His eclectic oeuvre reveals his diverse interests, from bodily function, and scatology to the function of art in the current market economy, and numerous subjects in between. The reverence of his hometown to churches and effigies of Christ had a great influence on his work. He is best known for the piece Cloaca, a digestive machine that turns food into feces, allowing him to explore the digestive process. The realistically smelling output can be bough in small jar of resin at his Ghent studio.