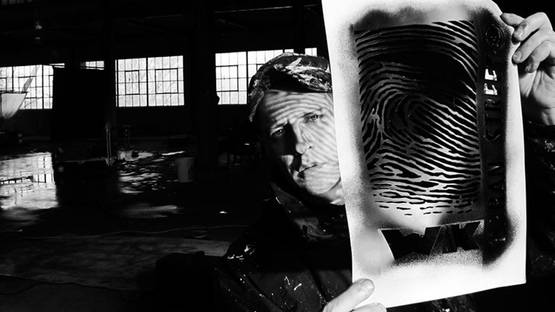 WK aka WK Interact is a French and New York-based artist who is interested with the human body in motion, his paintings of figures frozen in a flight of movement reflects this infatuation. The artist’s unique process involves a technique of twisting an original drawing or photograph while it’s being photocopied, resulting in the monochromatic palette and streamlined moment-in-time appearance of his finished work. WK site-determines his placements by finding an appropriate location first, then his imagery is chosen specifically with a concern for encounters in an urban environment or “interactions” (as the artist indicates in his pseudonym). In the late 1990s his images began appearing on building facades in downtown Manhattan, complimenting the constant stir of bodies and the perpetual motion of contemporary urban life in the fast-paced city.

WK’s ephemeral artwork includes wheat pastes and large-scale murals of figures in high-contrast black and white; each piece is site-specific and his imagery is always placed in accordance with its surrounding environment. Known for his elaborate creative process, scouting and sketching locations, staging models for photo shoots, and distorting their image on a copy machine, the artist creates exaggerated visual effects (or illusions) to convey rapid movement. In an age where the evolution of civilization seems to be accelerating at a speed of development—much like the figures in WK’s work—faster than we are able to process the change, the artist conveys themes of violence and mortality through a strikingly graphic and gritty aesthetic, one that is internationally recognized and regarded as distinctly his own.

WK Interact lives and works in New York, US.