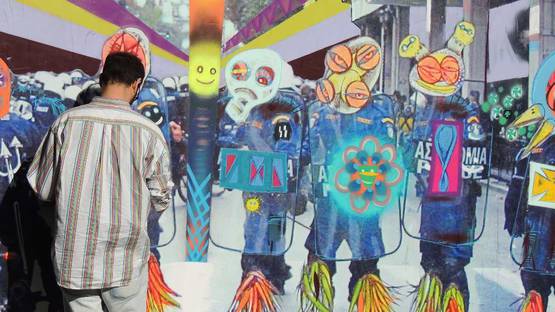 Vaggelis Hoursoglou aka Woozy is a Greek street artist, best known for his large scale murals painted in bright, vivid palette of colors, which is a recognizable characteristic for most of his works. His art has been a crucial aspect in the graffiti scene in Greece.

Hoursoglou was born in 1979 in Athens, Greece. In 2004 he began his studies at the School of Fine Art in Athens, which he completed in 2010. During that period he spent a year at the School of Fine Arts in Lisbon, Portugal as part of an exchange program. Since the completion of his studies, Vaggelis has worked on both commissioned and self-initiated projects in many countries around the world, including Denmark, Switzerland, China and Brazil.

Woozy was a founding member of collective named Carpe Diem, the first Greek non-governmental organization promoting street art, urban culture and alternative sports events. Furthermore, he is the coeditor of the group’s publication also called Carpe Diem. Carpe Diem graffiti group was unofficially established in 1995 with the intention to support fine art interventions and promote creativity in the graffiti culture, by legally giving artists the chance to express themselves. This was achieved through various activities, events and seminars that were open to the public. The collective published two books with photos from the beginning of the graffiti scene in Greece, as well as the quarterly graffiti magazine Carpe Diem.

Using an ample color palette, Vaggelis does not limit himself to one type of medium but rather experiments with different textures and techniques. His studio works include drawings, collages, various mixed-media works on paper and ceramics.

Well known for his outdoor wall paintings and large-scale murals that have decorated the international urban landscape, Woozy is an artist respected in the world of street art. Collaborating with a wide network of street artists most notably Os Gemeos, but also with Blu, Nunca and Borondo, he has travelled his utopian vision across Europe into China and down to Brazil.

Still, Woozy’s work is most noticeable in his hometown Athens, where countless signatures, small and large-scale murals, cover walls in many parts of the city. He began in 2005, with a 6 x 25m mural named My Neighbourhood, part of a collaboration project with his fellow street artists Os Gemeos. Five years later Woozy painted a massive 25 x 15m wall at the most central part of Athens, outside the Monastiraki metro station, titled as The Colorful Warrior. Along with Colorful Tsunami, a 20 x 12m mural in central Athens, they remain some of Woozy’s most renowned murals in the capital. Woozy has also been involved in political problems that struck Greece, painting a wall piece to share solidarity demonstrations with the mass protest taking place in Athens beginning in 2008.

Vaggelis Hoursoglou is currently living and working between Athens and London.