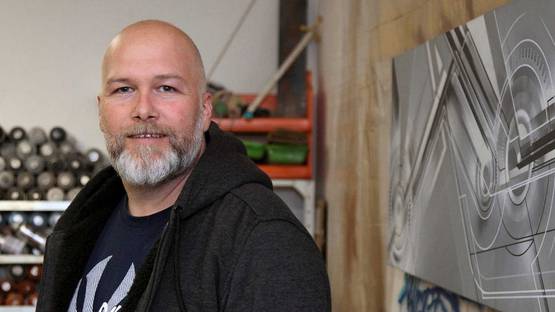 The work of Xavier Magaldi reflects the artist’s apparent fascination with futuristic forms and mechanical movements. The precise geometrical shapes, reduced palette, and the intense compositional relations reveal the concept reminiscent of avant-garde sensibility and profound interest in concepts of velocity and transformation. Over the years, the artist transitioned gradually from previous graffiti experience, which still has a notable impact, to fine arts. Nevertheless, Magaldi expanded his research of canvas and walls and plunged into examining different aspects of three dimensionalities by introducing the media of sculpture.

From Graffiti to Watchmaking and Back

Xavier Magaldi was born in 1975 in Geneva. He developed the interest in graffiti in the late 80s and instantly became particularly interested in the letters. The first experiments with spray-paint were done in 1989. After some years of torturing letters in wild style, he changed it for more abstract style and mechanical drawing. Parallel to his street art interest, Xavier Magaldi was trained as a watchmaker at the Ecole d’horlogerie de Genève and had the opportunity to work at one of the greatest maisons in watchmaking.Magaldi not only wanted to contribute to the inner beauty of the watches, he wanted to play a part in their outer beauty and design. So, after completing his education, as well as gaining experience with different companies, the circle closed when he came back to watchmaking industry.

Elements of watchmaking are a reoccurring theme in Magaldi’s work

Developing Authentic Style In Between The Disciplines

As an effect of his trade, Magaldi’ s art reflected his focus on the mergence of different disciplines – street art and watchmaking. Therefore, he started using various techniques originating from street art to integrate elements such as tourbillions and perpetual calendars. The parallel between street art and horology became additionally undermined through a visible and creative dynamism, so the moments of free art and pure creation laid the basis for his refreshed body of work. The precision, geometry and technical drawing, were reminiscent of Cubism and, even more, Futurism. The biggest success of Xavier Magaldi is his ability to materialize time and capture its energy on his monochrome paintings.

From canvas to objects

The Inspiration of Xavier Magaldi

As the artist states himself, anything can be inspiration, since he admits that he just loves to observe, analyze balances, compositions, shapes, beautiful objects. He is dazzled by the aesthetics as much as with technical domains. Whether it is architecture or urban planning, the artist can easily project himself through it and find forms that he can develop into his work. Xavier Magaldi is primarily focused on working with large format due to the need of feeling the gestures, the rhythm and in general the pulse of the artwork.

Similar to industrial drawings, the works are embellished with the futuristic appeal

Xavier Magaldi mostly uses the brush but the spray is also present and implies the special set of gestures and has a benefit of quick drying. The pens and markers are suitable for their accuracy and somehow are an homage to a technical drawing. Sometimes the artist uses other techniques such as stenciling, spatula, gold leaf, collage and modeling paste. Actually, the composition is perceived as a mechanism which operates only in the imagination and is, therefore, open to various transformations through the movement.

Xavier Magaldi is known for geometry shapes and precise lines

The Mechanical Interplay of Xavier Magaldi

The artist's work of in recent era is titled Post-Graffiti and it expresses artist’s vision of art, at the same time modern and traditional. At the beginning of 2017, the artist introduced new series of work titled Concrete thoughts, in the Speerstra Gallery, which reveal at once the new step he unveils this time and that is the idea of works embodied through the abstract but which, paradoxically, are built on concrete forms. These perceptible figures interact with each other and as a whole communicate with the observer and leaving him a freedom of interpretation. Apparently, the art practice of Xavier Magaldi is not only developing and maturing in purely formal or technical sense, rather it constantly transcends to another level of conceptually well thought and concise activity.

Featured image: Portrait of Xavier Magaldi - image courtesy of Revolution
All images are courtesy of the artist