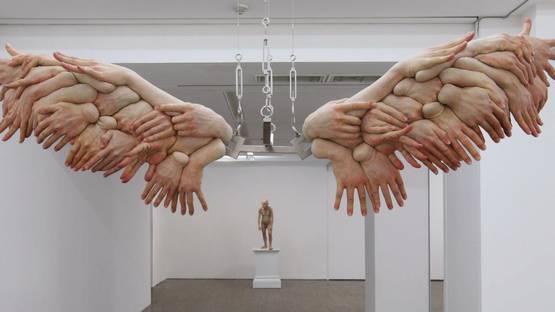 Deep, complex and sometimes mysterious, emotions are fundamental to the human condition. They color our days and have a profound impact on the way we feel about our lives. Although all people should be able to control their personal emotions, there are times when that is not the case – when, actually, emotions control us. Korean artist Xooang Choi has created an impressive body of work that shows us the realism of the human emotion frozen in an instant. His art reveals the raw reality of modern life ordinary people face every day if they don’t confront the outer world. The artist’s interest focuses on social systems that manage and control people, their behavior and feelings more than ever before.[1]

Born in 1975 in Korea, Xooang Choi obtained his MFA in Sculpture from the Seoul National University in 2005. Already during his studies, he became recognized for his tiny figurative sculptures made of painted polymer clay. However, since 2007 and his one-man show titled The Vegetative State, Choi’s figures have been enlarged in its scale, which gave more presence to his figurative sculptures that unearth dark emotions. The artist modifies proportions of the human-like characters or isolates body parts and takes them out of context to create disturbing and thought-provoking pieces that explore human rights, discrimination, society’s pathological state, isolation, loneliness, and sex and gender politics among other themes.

The Power of Body Language

Created from clay and resin, Xooang Choi’s pieces take on a strange life form all of their own. Extremely detailed and graphic sculptures wear poignant, but at the same time, very powerful expressions. Their feelings, fears, bitterness, anger and frustrations are written on their faces. Marble-like, flesh-toned figures show the sculptor’s concerns about human condition in the society. Although his highly detailed works can be described as hyperrealistic in terms of technique, Xooang’s sculptures are surreal at the same time, having their bodies distorted, exaggerated or merged with other species. His work shows how one perceives oneself and others as well as the society and environment where he or she belongs.[2]

Marble-like, flesh-toned figures show the sculptor’s concerns about human condition in the society

A Commentary on Society

Open for countless interpretations, Choi’s sculptures explore how a variety of social issues and value systems impact the humans. As the sculptor himself claims, the most important to his work is to raise questions in the audience, about human beings and their role in modern society.[3] His work has been exhibited in museums and galleries in Seoul including The National Museum of Contemporary Art, Gimhae Arts Centre, Dukwon Gallery, Doosan Art Center, Gwangju Museum of Art and the Museum of Art Seoul National University, among others. Internationally, Choi took his first steps into the contemporary art world in Paris, Beijing and Singapore.