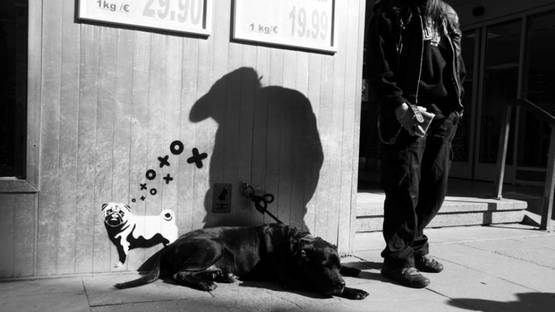 XOOOOX (pronounced “zooks”) is Berlin based street-artist known for guerrilla-style who works with delicate stenciled works and installations in an Arte Povera style that consist of weathered and decaying materials. He was born 1979 and started with classical graffiti at the age of 15. He never went to art school so instead of that he taught himself by practicing under railway bridges and while travelling around big cities like Frankfurt, Munich and Cologne.

XOOOOX is, in fact, regarded as the first German street artist that has come to prominence on the international art market. Though the artist’s works can be seen throughout the city his identity remains a secret to prevent against charges of public vandalism.

In his works, XOOOOX distinctly contrasts the glamour of fashion culture with existentialist themes such as vulnerability and transience. The life-size stencils of professionally styled photo models form the leitmotif of the figurative studies and scrutinize the worship cult and the seduction techniques of haute couture. Beguilingly beautiful, XOOOOX's women convey a sense of melancholy and introversion and allude to the growing displeasure with the uniform, consumption-driven hype of the fashion industry. Using transitory media such as exposed building facades, worm-eaten wood, rotting fabric and rusty metal, XOOOOX grounds this apparently glamorous theme in the street, but the artist’s aim is not to deconstruct fashion culture. XOOOOX pays homage to traditional haute couture while levelling criticism at the over-industrialization of fashion as a cultural artefact of our time.

XOOOOX’s work, whether on the streets of Berlin or in a gallery setting, conveys the dynamics between standard ideas of beauty and ruin. Grimy buildings and rough, untraditional art surfaces like raw wood, parquet flooring, or copper sheets are adorned with gorgeous women, often appropriated from photographs of fashion models, seductively glancing out to their viewers, who may be either art enthusiasts or simply random passerby. Many of the women are surrounded by the letters X and O, which doubly act as the artist’s signature and imply that it is XOOOOX himself that the women are thinking of, implying a strong personal connection between the artist and his women.

The transgressive quality of XOOOOX's graffiti is reinforced by the fact that the stencil technique that he uses originates in political tagging traditionally done by military and revolutionary organizations.Thus, XOOOOX's work is full of paradoxes. It is beautiful and focused on stunning models, and yet also becomes integrated into grungy environments and materials; it is optimistic and yet subversive.These qualities make his work so full of life, as his women seem to tell their stories from the walls that they rest upon.

If you want to see more of XOOOOX's work you can check out his first monograph edited by Benjamin Wolbergs and published by Gestalten. The book is focused mainly on artist's portraits of female models that he prefers to stencil or wheat-paste onto surfaces of older buildings scarred by the passage of time. The contrast between the strikingly beautiful women and the crumbling walls is a fundamental aspect of his creative vision.