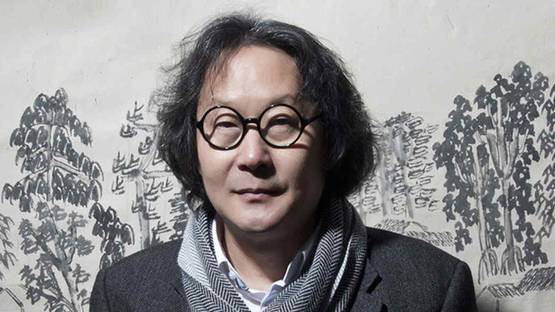 Xu Bing is a Chinese contemporary artist, born in 1955 in Chongqing, China. Xu grew up in Beijing, where he began his studies in the printmaking department at the Central Academy of Fine Arts in 1977. Focusing on drawing and printmaking, Xu earned a BA in 1981, as well as an MFA in 1987. One of his best known works, Book from the Sky (1987–1991), earned Xu international recognition in the 1980s. The work is a massive installation made up of hundreds of volumes and scrolls printed with 4,000 imagined Chinese characters, which were cut by hand into wood printing blocks. Xu’s use of a fabricated and therefore indecipherable lexicon suggests that written text may be an inherently deceptive mode of communication.

In later works, Xu continued to explore themes surrounding language and writing. For a 2011 exhibition at the British Museum in London, Xu created an ephemeral installation called Background Story 7 as part of hisBackground Story series. Inspired by a 17th-century traditional Chinese painting, Xu created a diorama-like, sculptural image using corn husks, crumpled paper, and dried plants. Viewed through backlit frosted glass, the arrangement resembles a delicately painted landscape, while the opposite side reveals that the scene is comprised of discarded items and debris. Xu moved to the United States in 1990. In 1999, he was awarded a Genius Grant from the MacArthur Foundation.

Currently considered one of China's best-known artists, his work has been exhibited in Asia, Australia, Europe, and the United States in various venues, including the New Museum of Contemporary Art in New York, the Arthur M. Sackler Gallery in Washington, D.C., and the National Gallery of Prague. In 2008, he was appointed vice president of Beijing's Central Academy of Fine Arts.

Xu Bing currently has homes in both Beijing and New York.