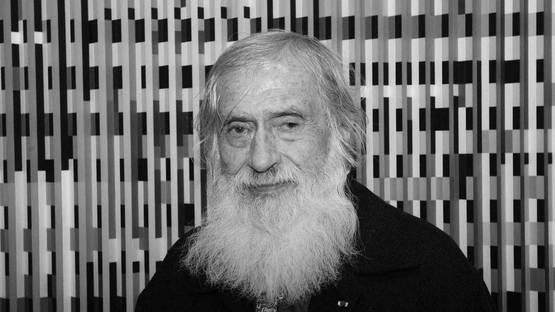 For more than five decades the matters of perception occupied the work of Yaacov Agam and made him one of the most influential artists of modern times. From the very start of his artistic career, the artist has rejected conventional art approach and media in a favor of conducting a methodology reminiscent to the legacy of avant-garde movements. Agam’s idea to extend the viewer's perspective of the artwork and incorporate multidimensional movement was governed by the desire for more participation which was in accordance with the times of then art and society currents.

Yaacov Agam was born as Yaakov Gibstein in Rishon LeZion, then Mandate Palestine. His is born in a family and received no formal schooling, but was inclined in religious practice since his father was a rabbi and a kabbalist, which largely reflected on his later practice. Agam studied at the Bezalel Academy of Art and Design in Jerusalem, before moving to Zürich in 1949. Then, he assigned to study at the Kunstgewerbe Schule where his lecturers were legendary artist’s Johannes Itten and Max Bill both affiliated with Bauhaus movement. In 1951 Agam went to Paris where his career started developing rapidly.

The pioneer of kinetic art

Although during that time Paris was still recuperating from the effects of WWII, the art life already became consolidated. Among the city’s most important galleries was a Galerie Craven which was a hot spot for burgeoning artists at the time. In 1953, Agam’s first solo exhibition was organized there and immediately he became noticed. After only two years, the gallerist Denise Rene, who showed modern art masters such as Max Ernst and Francis Picabia, organized the iconic exhibition Le Mouvement in 1955. The idea was to introduce the blossoming movement of kinetic art and gathered the group of artists from Jean Tinguely, over Alexander Calder, Victor Vasarely, many others, and among them Yaacov Agam.

Introducing The Kinetic and Optical Aesthetics

The very choice of plunging into the abstract is, without the doubt, related to his family background fulfilled with ascetics and the study of Hebrew mysticism known as Kabbalah. Agam’s nonrepresentational style is an integration of formalist art, but with a particular focus on the matters of perception respectively optical illusion in accordance with the movement. Such a concept was rather radical from conventional mimesis since the observer is able to interact by manually transforming the work or by physically passing by and hence change the meaning, angle or the context of the artwork.

The Legacy of Avant-Garde

As it was already mentioned, one of the Agam’s lecturers was Johannes Itten, painter, writer, and theorist. He was perhaps one of the most prolific Bauhaus teachers since his methods were based on contemplation, ascetics and physical exercises. Much of his theoretical work was dedicated to the basics of material characteristics, composition, and color, which reflected greatly on Agam. Besides that and the fact the artist basically was a prodigy in regards to forming his personal style without any references from Western art history, the influence of Duchamp’s concept of ready-made is rather notable.

The environment shifting according to the viewer's position

During the course of years, Agam has been working in a variety of media, including painting in two and three-dimensions, drawing, sculpture, ceramics, stained glass, serigraphy, lithography, etching, and combinations of media. Nevertheless, in 1953 he introduced the creation of the Agamograph, which somehow made his whole activity even more recognizable. It was an experiment which consisted of a multiple series of images viewed through a lenticular lens that changes at every angle viewed. Actually, That how Agam introduced time as another factor to consider in the process of creation.

The philosophical standpoint behind the fascination with rainbow

The Specific Use of Color In Work of Yaacov Agam

One of the most important features of Agam’s work is the color. The palate he uses is very vivid, brilliant and varied in all his creations. The choice of colors is related with Jew religion since Yaacov Agam considers the rainbow as the first gift from God to mankind. In Hebrew, the name of Jehovah is Mehaveh Ou-Mitzvah, which means constant change. Such a synthgma is extended by the element of time, so the whole system and methodology of his is rather complex and interconnected.

The continuous interplay of forms and colors

Site-specifics and Installations in Public Space

From the 60’s onwards, Agam started receiving commissions for works in public space. Among the most famous are probably the fountains at the La Défense district in Paris and the installation titled symbolically Fire and Water Fountain in the Dizengoff Square in Tel Aviv. In 2009 Agam created a monument for the World Games in Kaohsiung, Taiwan titled Peaceful Communication with the World. It is a colossal object constructed out of pillars positioned in diamond or square formation and their sides are painted in different patterns and hues. The other known work of his a notable, world’s largest Hanukkah Menorah light installation in New York City. The object consists out of real oil lamps, which are lighted every year during Hanukkah.

Agam is one of the very few living Israeli artists

The Importance of The Work of Yaacov Agam

Without any doubt, Yaacov Agam is an innovator and reasonably his works are part of Museum of Modern Art and the Mildred Lane Kemper Art Museum as well as a great number of public and private collections around the globe. The artist is the subject of two documentary films Possibilities of Agam and Agam and... by American filmmaker Warren Forma. Not only that the artist proclaimed the new concept of art as no longer permanent, inaccessible and still, but was eager to achieve a different kind of communication with the public in regards to a silent exchange of energy, experiences, and sensations. As Yaacov Agam proposed in his artist statement his intention was to create a work of art which would transcend the visible, which cannot be perceived except in stages, with the understanding that it is a partial revelation and not the perpetuation of the existing. The outstanding activity, extremely precise and heterogeneous concept and immense efforts of conjoining art and science into a new form made Yaacov Agam as one of the world’s most important artists of the 20th century.