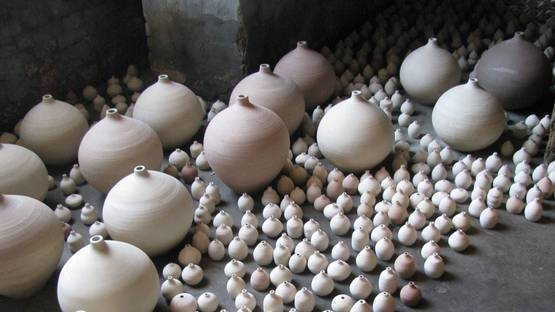 Born in 1966, in Dalian, China, Yang Maoyuan is a highly regarded artist well known for his large and diverse body of work encompassing painting, sculpture, photography and installation. Yang’s works often express his understanding on the sources of culture and the core of life, the theme he most interested in is how Art generated the inner power that could adapt with its Time, and how an individual artist express this inner power by his/her own way.

He received his BA degree in Engraving from Central Academy of Fine Arts of China in 1989. Since 1994, Yang Maoyuan has entered the deep heart of Taklamakan Desert and Lop Nur (the most mysterious area in the Silk Road) for two times. Facing the wonders of aeolian sand dunes and barren lands, Yang Maoyuan was totally won over by the supreme power of nature. By explore in the remains of ancient Loulan city, whose demolishment is still a mystery, the disappeared civilization inspired Yang’s magnificent imagination. The experience of these explorations later became the spine of his art creation. Since 1995, earth and man appears in Yang’s paintings repeatedly as a main object, dark blue sky, golden-yellow earth, and giant human body embedded with the earth, evoke extremely strong visual effect and aesthetic emotion.

Around 2000, Yang Maoyuan made inflatable sculpture Horse and Sheep. He made inflating balls with hides of horse and sheep, in which original forms of animal are eliminated intentionally by the author, conveying a certain bizarre and arcane force. “Inflation” could be taken as a metaphor of the deepest aches of the people and the society in China. In the same time, inflation and roundness could also be deciphered as recurring, powerful and everlasting life process. In Yang Maoyuan’s outlook, roundness means harmony and ideal in Chinese culture, the horse is inflated and rounded, means it is idealize as a harmonious entirety. The co-existence of “the ache of inflation” and the “harmony of roundness” make Horse and Sheep complicated and self-conflicting wholes, for which give the viewers great impact, is the most uncannily unspeakable and most feeling-arousing element of these art works. As an ultimate form of substances in the world, “roundness” digests the original forms of horse and sheep, gives them a freaky culture-aroused feeling. Inflatable horse and sheep represents Yang’s posture towards art: through the use of the psychology concept archetype, he out-emerge the pedigree and uniqueness of his art thoughts, makes his works distinctive in modern arts, so their originality is strengthened.

After Horse and Sheep, this kind of usage of roundness and the technique of dissolution used in his Look Inside sculpture series. Inspired by the culture thoughts of western from Classic Period to the Age of enlightenment, Yang Maoyuan developed a unique way of sculpting. He cited the concept of beauty from the western culture, only for questioning it. To counter the western discourse, Yang grinded and polished all the edges and details of western classical sculptures, reinterpreted them with the inner looking eastern culture views, expressed the philosophical idea of “roundness is harmony”.

In Yang’s resent paintings, he evolves early experience of journey in central Asia, which inspired his explorations on time and space, constantly conveys another form of the light. From sunrise to sunset, in every moment, there is certain light-temperature, which corresponding to a color in the spectrum. Yang measures the light-temperature from dawn to dust day by day for several years, draws down the corresponding colors on paper, and has accumulated a massive and precious light-temperature database. Draw with light-temperature, could be seen as a metaphor of the thought of time everlasting and circulating, and world recurring. By all the works mentioned above, Yang Maoyuan strives to establish an attitude that could correspond to the identity of local culture and the artist himself.

In 1989 he participated the ground-breaking Modern Art Grand Show of China. Yang won the CCAA modern art of China prize in 2002. His art works have been exhibited in Beijing, Shanghai, Paris, Berlin, Dresden, London, Florence, Genoa, Warsaw, among others. The galleries and museums that have exhibited Yang's art works including The National Museum of Fine Arts in Warsaw, Pompidou Center, Dresden Art Center, Today Art Museum, Martin-Gropius-Bau Museum, Erdos Art Museum, Padua Villa Breda Museum, Medici Riccardi Palace, etc. His art works are favored by public and private collectors. In 2011, as the representative of Chinese artists, Yang Maoyuan took part in the exhibition in China Pavilion of Venice Biennale.

He currently lives and works in Beijing, China.