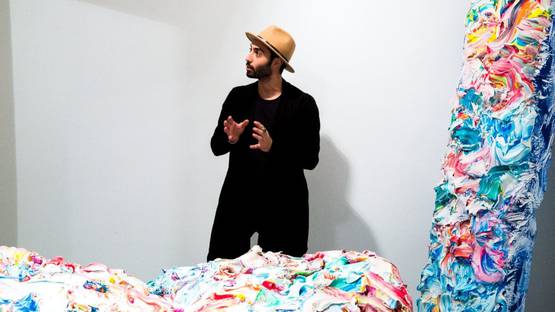 Finding ways to represent human emotions is the basis upon which many modern artistic movements have built their principles. The twentieth century was full of different individuals who have tried to portray their feelings through their work. Yann Houri is a French painter whose ideas are not that different from his older predecessors - his work attempts to display human emotions but in a new unique approach unlike anything attempted before him. Yann creates a visual explosion through the use of color that is intriguing yet anarchic, but nevertheless perfectly mastered.

Houri was born in Paris during the year of 1990. As you can see, that makes him a very young artist, which is commendable when paralleled with the level of complexity his work has achieved so far. This becomes even more impressive when you consider the fact that he is self-taught. Being skilled with photography and possessing a gifted drawing hand, Yann used these talents to create art unbiased by anything before him. He decided to pick human emotions as the centre figure of his artwork. This by itself is a brave task, for many notable artists before Yann have strived to give this a go and failed. When you look at Houri's style, the first thing you see is a fine balance between realism and abstraction. The rate at which this equilibrium functions changes from piece to piece. Some paintings have a near 50/50 ratio while some blow over to the abstract side to the fullest. While that balance may differ, all his paintings share a vivid color palette. His work is so full of color that they seem as little celebrations of the wonders our eyes are capable of performing. Colors are the focal point of his art and they are used for one purpose only - to represent the experience we get from different emotions. Fear, lust, anger - Yann attempts to depict how those feelings may look if translated into a visual language he made from scratch. Some of Yann's paintings have another goal besides displaying emotion - they battle the concept of time. Houri warns us about how we spend our time in this contemporary day and age - Yann sees us more as wasting it than trying to spend it wisely and even use it to our advantage. Yann tries to capture the present instant, the moment we live in. He tries to make us realize we should concentrate on that particular moment, not dwell on the past from fear for the future. We need to slow down and treasure the present, enjoying the beauty of our emotions. Don't force yourself to rule over them . Just cut them loose and savor the effects.

As was said above, what inspires Houri are human feelings. How we react to different situations, the ways we battle problems and how they affect us emotionally - these are the things that Yann wishes to depict with his pieces. He seeks to capture the archaic reactions triggered by our emotions, mostly in a psychological way. He does this through the use of vibrant and explosive paintings which are literally drowning in color. Over time, Houri established an immediately notable contrast between drawing with clear lines and painting with a maddening flurry of vibrant colors. Many art critics have described his art as fireworks - which is actually a very good attempt at defining Houri's work since his figures appear as exploding, with colors surrounding the place of impact. This visual language is a complex one but so are the feelings Yann works with. His paintings are a real turbulent sight to behold due to the sheer velocity of elements Houri puts in front of us. Ironically, being chaotic as they are, it's interesting to note just how much apparent tranquility this artist is able to convey without compromising his characteristic fieriness. This came from years of practice and development Houri went through. Yann also uses many experimental techniques, materials and methods of painting - such as working on large scale papers and afterward cutting it in many pieces that are later taped to a enormous wall in a random order. These kinds of ventures have enabled Yann to gain the reputation of a ground-breaking artist who will stop at nothing to achieve the goals he sets for himself. We are glad to announce this artist's recent work will be on display at Art New York Art Fair and at Art Market San Francisco in the May of 2016!

Houri tries to present human emotions in a unique way

What We Feel Is What Fuels Yann's Art

Yann has developed a new, explosive style of representing our feelings. His visual approach is very aggressive at times, bombarding our perception with a seemingly maximum number of colors we can handle. This usually goes alongside his takes on emotions such as rage or excitement. Some of his pieces depict calmer feelings and that is also visible on the color palette which becomes more tame in such cases. Ultimately, Yann delivers what he promises. You are always able to recognize what his subjects are feeling, and furthermore, his creations invariably evoke strong responses from audiences. Yann's paintings are a celebration of life and the mystery that lies in every single one of us.

The artist is represented by We Art Partners in Paris, France.