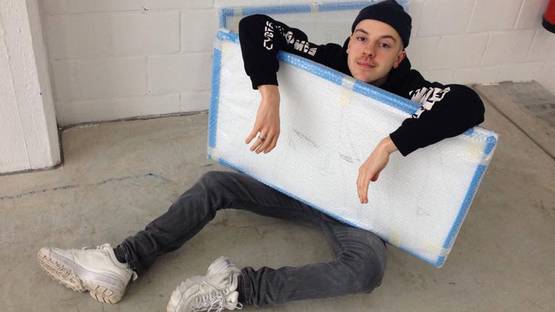 Yannick Val Gesto is a Belgian artist most interested in cyber culture and new media. Focused on the materialization of the digital, Antwerp-based artist uses virtual elements from cyber world, pouring them into a physical state and placing in a different reality and context. Born in 1987, Val Gesto earned his BA in Graphic Design from St. Lucas, Antwerp, in 2008, as well as BA in Visual Arts from Campus Congres, Antwerp, two years later. In 2009 he received his MA in Graphic Design from St. Lucas.

In collaboration with Benny Van den Meulengracht-Vrancx, Yannick Val Gesto published a book entitled Deviant in 2013. Based on the work of the community website for artists called DevianArt, Val Gesto is inspired by amateur online practices. His pieces are attempts at capturing the essence of entertainment-related intellectual properties, mainly of those that are heavy on the eye. Val Gesto’s semi-abstract 3D renders are constructed through the usage of game-fonts, 2.5D painting, found imagery and multiple image-editing programs. The working process is based on intense visual research, speed, production and trial and error. Working with digital representations from the Internet, his compositions drenched with information and an unconventional feeling of aesthetics.

For one of his latest series, Petrified, Val Gesto did quite the opposite from Deviant, stripping close-up images of some of his favorite anime characters, until only black outlines remained on a white, empty background, removing the outspoken anime characteristic. The characters become anonymous, idle and gender-less, without losing the original attractive power of the screen-capped image. Through a more subtle and universal language, these works transcend their source material, beyond the niche.

Yannick Val Gesto has participated in many exhibitions in his hometown Antwerp, as well as in New York, Edinburgh, Milan, Brussels, Basel, Eindhoven, Toronto, Athene, Rome, and Los Angeles, among others. Since 2013, he is represented by LevyDelval, Brussels, Belgium.