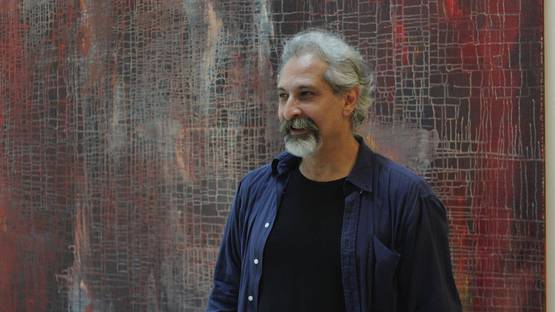 Known for his richly textured, layered color field paintings that explore processes of metamorphosis, Yari Ostovany is an Iranian-born American contemporary abstract artist. Interested in the crossing point of the unconscious, the personal and the collective, he absorbs and projects onto the surface of the painting the energies that come to surface from the interplay of primordial contradictory forces - those within and without. Through densely layered organic compositions made over time with layers upon layers of thick and thin washes and glazes, luminous and opaque, the artist unfolds an evolutionary process. The work isn’t complete until a sense of resonance arises - when the whole finally becomes greater than the sum of its parts, when forms and marks become metaphors for a transcendent reality.

“I approach painting as the visual evidence of, and not a report on, an experience; not a representation of spiritual energy but a translation of it into light and texture, navigating the space between stasis and movement, between emergence and disappearance. My work is process based and improvisational, straddling the nebulous realm between the mystical and the mysterious and thus, to me, the spiritual. A personal journey of exploration through the alchemy of paint, color, light, texture and the poetics of space.”[1] Ostrovany’s oil on canvas works unfold over time, with each new layer of pigment, and with the processes of washing out, covering up, scraping away, and dissolving. The composition becomes deeper and more luminous with each new phase in the process. A series of calligraphic gestural marks often marks the birth of a painting, as the artist moves on to rub and dilute the marks, allowing them to meld together with previous marks and layers, coaxing new dimensions of color and texture. The transient nature of the layers becomes embedded into the visual language of the work, evoking a sense of movement and transcendence.

In his statement, Yari Ostovany characterized painting as a personal journey of exploration through the alchemy of paint, color, light, texture and the poetics of space

Influenced by a variety of different cultures, Ostovany feels a connection to multiple separate and yet complementary mystical traditions. He seeks to unravel natural and mystical processes as he looks toward elements of Western and Eastern art, literature, spirituality, poetry and music to create an environment and a mindset conducive to his process, which is connected to Abstract Expressionism and Color Field painting. Known for working in series, each of them “has its origin in a cognitive/emotional spark, an experience used as a point of departure, where gestural outbursts, atmospheric passages and the ethereal coalesce, with a blending of intellection and intuition, to perhaps bring together unfinished inventories of fragments and detritus of states of formation – the liminal states.”[2]

Chellehneshin is a compound word in Persian consisting of the words Chelleh; which describes a period of forty days; and Neshin, which literally means sitting. It refers to a seeker going into solitude for a period of forty days and forty nights to pray and meditate. In several mystical traditions, The cycle of forty is a common duration needed for the metamorphosis of the spirit and transition to another, transcendent dimension. The paintings from Fragments of Poetry and Silence series are inspired by Dream, a poem by John Berger. Numinous is inspired by the meaning of the word itself – translated from Latin, it means evincing the presence of a deity; Filled with or characterized by a sense of a spiritual presence.

Born in Iran in 1962, Ostrovany moved to the United States at the age of 16, just several months before the revolution. He first pursued his artistic interests by studying at the University of Nevada – Reno before receiving his MFA in 1995 from the San Francisco Art institute. He was based in Cologne from 2000-2004, and since 2011 has been residing in the San Francisco Bay Area again. The painter has worked, taught, traveled and exhibited extensively in the USA and internationally, and is the recipient of several grants: Sierra Arts Endowment Grant, Craig Sheppard Memorial Grant, and Sierra Nevada Arts Foundation Grant.

He is represented by IdeelArt.

Featured image: Yari Ostovany - portrait of the artist - photo credits DeWitt Cheng, image via huffingtonpost.com
All other images courtesy of the artist