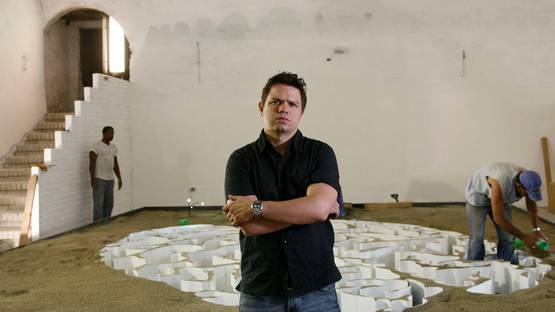 Yoan Capote is a Cuban sculptor of great talent, and one of his country's most promising contemporary artists. He was born in 1977 in Pinar del Río and studied at the Superior Institute of Art from 1991 to 1995. He also received the UNESCO prize during the 7th Havana Biennial with the artists collective DUPP (Desde Una Pragmática Pedagógica).

Capote’s work is known to be “solid”, “irreverent”, “provocative”, “non-conformist”, and deals principally with interactions between individuals and their psychological experiences. His pieces often merge human organs with inanimate objects, rearranging the human body and reinventing the purpose of everyday life objects. Example for this practice is one of his works entitled Open Mind (2006). It is a labyrinth based on the drawing of the human brain where people can walk. People become metaphors for neurons transmitting information as they walk around the maze. From his first exhibition, Yoan Capote has shown a peculiar sensitivity toward everyday objects. He could be said strives to reveal the metaphorical facets of objects and to make certain interpretations about the people who consume or modify them through use. In that sense, the use of everyday objects as a self-imposed choice makes Capote a peculiar type of sculptor, one who remains alien to the traditional methods of art. His method of creating pieces is extremely intellectual, a sort of ping-pong game between an abstract concept and the different ways in which it can be expressed. Consequently, his pieces assume a variety of appearances, engravings, sculptures, assemblages, and drawings.

Matrimonio (Matrimony) is Capote’s ironic take on one of the unresolved enigmas in the history of humanity, the conjugal union. The spouses will have a close relationship, but will never be able to consummate the marriage. The disposition of the shoes condemns them to circle eternally around each other. As a member of DUPP, Yoan Capote presented 1… 2... 3… Probando at the Seventh Havana Biennial. The title refers to the first words that are generally spoken when testing audio equipment or microphones, as is the case here. Capote’s proposal consisted of an installation in a public space, namely, the placement of multiple microphones along the wall of the Malecón, Havana’s seaside promenade. The devices would face not only inward from the shoreline but also out toward the sea, the open space. This piece implicitly paid homage to one of Havana’s main thoroughfares, which runs along the city’s northern border. Completed after 1…2...3… Probando, Protocolo (Protocol) was created as part of an installation consisting of two similar chairs, a long aluminum-and-glass table placed between them, and a soundtrack of mumbled, unintelligible phrases. It was not the first time that Capote had built furniture. He had previously made metal and wood park benches infused with a strange, expressionistic quality, but this time, the piece of furniture loses all suggestion of functionality to venture into the field of the purely symbolic. Moving from 1... 2... 3… Probando to Protocolo, Capote’s meaning became more allusive and obscure, and infused with a deeper ambiguity. In this piece, the metaphor is nurtured or even generated by a contradiction between the function of the object being portrayed and its structure, or the materials from which it has been made. It is a proposal that does not want to be classified by local cultural contexts, but rather by the universal scope of its mise-en-scène.

Yoan Capote held many exhibitions all over the world and he is currently living and working in Havana.