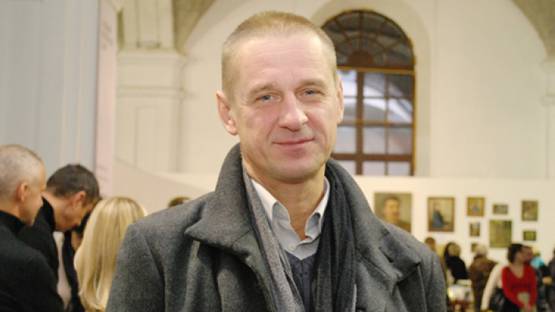 Yuri Solomko is an Ukrainian contemporary artist, known for creating works that involve maps and cartography, to which he adds subjects and symbols, creating new connections and meanings within each of his paintings, depicting a wayward dance of meridians and coastlines.

Solomko was born in 1962 in Crimea, South Ukraine. He studied at the Art school in Krasnodar, Russia graduating in 1986, and afterwards at the Kiev State Art Institute, Ukraine, where he got his degree in 1992. The artist lived and worked in New York in 1996 as a recipient of CEC Arts Link Residency program. Solomko can be considered a representative of the New wave in Ukrainian art, and in the late 1980s he was involved in the group Paris Commune. He played a vital role in the development of the Ukrainian art scene over the last twenty years or so, during which time the country has undergone a period of great social and political change. Each of his works is unmistakably Ukrainian - with references to culture, values and history that are specific to this unique nation.

Solomko’s obsession with maps is noticeable, causing him to create various series of works that involve maps. The artist skillfully juxtaposes figures over political maps often creating geopolitical irony. The artist works in oil on canvas media as well as painting with oil and pencils over printed maps. For some compositions the artist photographs maps projected over figure and then finishes the composition with mixed media. ‘The only thing that is not in the map is its intangible, non-visual concepts. There is no map for emotions and feelings. I tend to think that any painting is a map of feelings’, as the artist states. For information already contained in this document, the artist adds his own. Yuri sometimes have to cut the card into pieces, and then combines them into a kind of collage or glue together several cards - and then draw on them. It all depends on the ideas of the future picture. Some of his cartography series depicts trans-national graffiti artist, who reaches over regions and continents, other portray the refined heroes of the past that paradoxically intertwine with the points of continents and oceans.

His works are in the collections of the State Russian Museum in St. Petersburg, Russia, Museum of Russian Art of Alexander Glaser in New York, Art Center Henny-Onstand, Hovikoden in Oslo, Norway, as well as many private collections around the world.

In 1997, he received the Golden Section in Contemporary Art award, given to him by the International Art Festival in Kiev. In 2001 he was among the participating artists in The First Ukrainian Project at the 49th Venice Biennale.