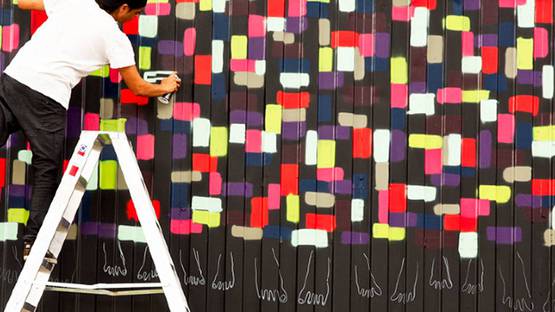 Yusk Imai is a contemporary artist who was born in the U.S.A. in 1982, to a Japanese descendent family. At the age of 6 months his family migrated to São Paulo where he lived until recently. Since 2007, Yusk has exhibited extensively within galleries, at art fairs and on the street across Europe, U.S.A., Australia and South America.

The flat perspectives and dramatic curves demonstrated in Imai's work is reminiscent of Art Nouveau greats such as Gustav Klimt. Much like the collection of short stories of the same title, “Oblivion” by influential author David Foster Wallace, that expose the rawness of humanity through surreal landscapes and nightmarish tales reeking of maniacal behaviour, insomnia, suffering and self-defeat, Imai’s paintings and drawings lure us into state of self-consciousness and questioning. These ostensibly post-apocalyptic works tread warily between sci-fi apparitions, threatening premonitions and horror stills. Like a séance, they speak to Dali’s technique for creative thinking; a thinking that was founded on the moments in which we begin to fall asleep. When this sleeping pattern is interrupted and we are awoken, we find the subconscious rise to the conscious as a definitive form through either image or word.

While the works in Oblivion have a definitive starting point, they materialize organically. Beginning as a simple line, circle, or pattern, Imai’s hand is governed by the impromptu recollection of forgotten dreams and mislaid memories. It moves in reaction only to the mark that follows the last. Like the part human, part robotic hands within his images which appear to orchestrate the spectacles that unfold before us, Imai’s acts as if it too is guided by a puppeteer – an ascendant body, be that a ruling power or spiritual leader.

Yusk Imai is currently undertaking a two-month residency in Melbourne, Australia, before travelling to Tokyo, where he is planning a new collection of illustrations based on Japanese folklore and then Europe, where he will establish a studio.