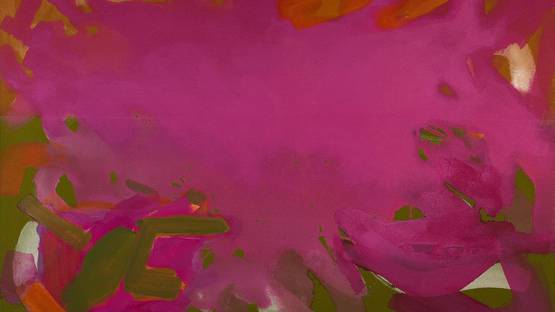 The American painter Yvonne Thomas is best known for her lyrical and sophisticated abstractions, prized for their interrogations into the symbolic possibilities of color. Her works consisted of soft, curvilinear brushings harmonized into a pictorial lyricism.

Born in Nice in 1913, Thomas immigrated to the United States in 1925 and studied at The Cooper Union, and the Art Students League. She also attended the Subject of the Artist school, with other famous Abstract Expressionist artists such as Robert Motherwell, Mark Rothko, Barnett Newman, William Baziotes and David Hare. After becoming a member of the Artist's Club, she exhibited in the 9th Street Art Exhibition in 1951.

Thomas' works evolved from early Cubist structures into increasingly expressive compositions. After a three-artist show at Tanager Gallery in 1954, in which Thomas was included, Stuart Preston described her as an artist who distilled “non-specific emotional moods in a language of restless brushwork and fitful color.” Her works were characterized by wide brush-strokes and sweeps of color, forming a personal, fresh, clear and uncomplicated lyricism. The issues she addressed and the zeitgeist of her art gave Thomas a central role in the avant-garde movement that she embraced.