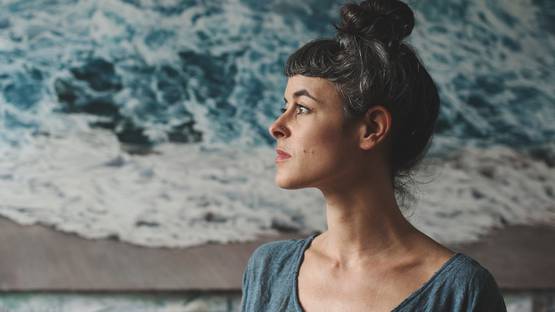 Have you ever found yourself in front of a painting that looked so breathtaking that you couldn’t find the right words to describe it? If your answer is negative then you definitely haven’t seen the work by Zaria Forman. Inspired by the most remote places on the face of the Earth, New York-based artist creates amazing hyper-realistic pastel drawings that include carefully rendered images of glistening icebergs, turbulent arctic waters, and crashing tropical waves. Among being masterful pieces of art, her stunning highly detailed artworks - that many might mistake for a photograph – are playing a role in raising awareness about some of the most important environmental issues including global warming and sea-level rise.

Born in South Natick, Massachusetts, in 1982, Zaria Forman grew up in Piermont, New York, half an hour north of New York City. The inspiration for her drawings began in early childhood. Her mother, Rena Bass Forman, spent much of her life, taking photographs of the most remote and often desolate locations in the world. The cold and isolated landscape of the Arctic consumed her interest for over ten years. Her pieces from her trips to the North Pole has been compared to artworks created by 19th-century photographers John L. Dunmore and George Critcherson who accompanied the American artist William Bradford on his 1869 expedition of Arctic seascapes. Zaria traveled with her family throughout some of the world's most faraway landscapes, which were the subject of her mother's fine art photography. During those trips, Zaria developed an appreciation for the beauty and vastness of the ever-changing sky and sea. Her mother taught her a great deal about light, and the ways it can be captured illuminating a landscape.

The majority of Forman’s work is informed by the threat of climate change, and her drawings squarely place the viewer in front of a slow-moving yet unavoidable tension that reflects humankind and nature’s shared predicament. Whether depicting glaciers, bodies of water or storm fronts, her work focuses on the problems we face in terms of water conservation, melting polar ice, and rising sea levels. She explores moments of transition, turbulence and tranquility in the landscape and their impact on the viewer.

Traveling to outlying parts of the world, Forman takes photographs and creates sketches, working from these and her memory in her studio in New York City after she returns to the United States. While creating ultra-realistic images, Forman doesn’t use any drawing tools, only her palms, and fingers, to smudge the pastel pigment into the paper. What on first glance look like photographs of pristine, icy waters are actually pastel drawings by the talented artist. She creates exquisite details of icy landscapes and beaches to highlight the effects of global warming on the planet using only her hands, paint, and chalk.

In August 2012, Zaria led an Arctic expedition up the NW coast of Greenland. Called Chasing the Light, it was the second expedition with the mission to create art inspired by this dramatic geography. The first, in 1869, was led by the American romanticist painter, photographer, and explorer, William Bradford. Zaria's mother, Rena Bass Forman, had conceived the idea for the voyage but did not live to see it through. During the months of her illness, her dedication to the expedition never wavered and Zaria promised to carry out her final journey. The pieces Zaria subsequently made were inspired by this trip. Documenting climate change, the work addresses the concept of saying goodbye on scales both global and personal. In Greenland, she scattered her mother’s ashes amidst the melting ice.

In August 2012, Zaria led an Arctic expedition up the NW coast of Greenland

Expedition in the Maldives

Continuing to address some of the greatest environmental challenges in her practice, Forman spent September 2013 in the Maldives, the lowest-lying country in the world. She found inspiration there to create a body of work that would shed light on a nation that could be entirely underwater within this century. Two award-winning artists who participated in the Greenland expedition Chasing the Light joined her in this venture. Those were a painter Lisa Lebofsky, and a director, filmmaker, and actress Drew Denny. During the month on the islands, they shared the concept of the project with children on the islands, inviting them to document their homeland as it transforms throughout their lives. The children can use their creativity to continue spreading awareness while inwardly processing the ecological transformations surrounding them.

Set Designs for House of Cards and Giselle

Forman’s work has found its way into popular culture as well, gracing the walls of Claire Underwood’s (Robin Wright) office in Netflix’s TV show House of Cards. Directed by David Fincher and starring Kevin Spacey, TV series House of Cards offers a look behind the scenes at the greed and corruption in American politics. Amongst in the House of Cards, a series of ten drawings Forman created were used as the set design for Giselle, a classic ballet that premiered at the Grand Theater of Geneva, Switzerland, in October 2012. The Swedish choreographer Pontus Lidberg and Zaria Forman collaborated to choose each image and its details. Photographs of the drawings were then enlarged and printed to fit the stage.

From Storms to Hawaii

Zaria Forman received her Bachelor of Science in Studio Arts in 2005 from Skidmore College, Saratoga. Since her first series of works in 2004, called Storms, the artist has received a lot of attention in the art world. Her work was included in numerous individual and group shows throughout the United States and beyond. Amongst Storm, Greenland 2006 and 2012, and The Maldives, her series of works include Thompson Lake, made in 2010, Israel, inspired by the coastline of Tel-Aviv, Svalbard, archipelago above the Northern tip of Norway, Nosara, Costa Rica and Giselle, a series she created for the ballet performances. In Spring 2015, Zaria went on a permaculture eco-adventure retreat in Hawaii. Although the trip was intended to be a vacation, she was inspired by the beauty of Hawaii and additionally she drew her latest series titled Hawaii. The talented artist continues to travel the world in a search for the stunning, but endangered locations. She has chosen to depict all these amazing places hoping that her paintings will inspire us to protect and preserve our environment.