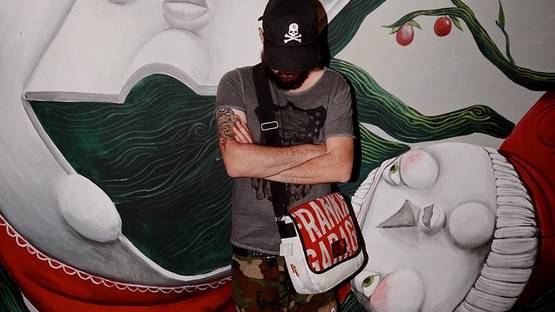 Marco Burresi  is Italian street artist who is better known in art world as Zed1. Born 1977  in Florence Tuscany, ZED1 started painting walls about 20 years ago and is best known for his murals of egg headed humans and curious critters that have decked walls from Amsterdam to New York.

Versatile artist manages to pass with ease from the wall to canvas, from graphic design to that for major clothing brands. His work stands out with a unique and provocative interpretation of forms and an enchanting and sometimes melancholy color palate. With wise use of the spraying technique, given a well-founded experience, ZED1 is able to obtain harmonious shades as if they were watercolors, his technique can be sudden, splashed, unfinished, as well as precisely attentive to detail. His characters are found to have strands of hair perfectly defined and texture decorative in their clothes. Marco's recent portfolio is populated by puppets, elves, clowns and imaginary characters that can be likened to those of a fairy tale; melancholy and reflection are the masters in the atmosphere he paints.

The artworks of Zed1 can be characterized by a good dose of humor, a very unique and personal style, his recognizable figures, use of color and his close eye for details. For his works he says they are a juice of his experiences. He also loves to challenge and he creates an interaction with his audience. Through a constant and varied development of the technique, his style evolves accordingly to his work as writer, which leads him to paint trains, walls and surfaces of all kinds. Following his predilection for imagery, he succeeds in creating a world of humanoid puppets, which, in their illusory sterility, interact with the world around them, evolving both in space and time (as in the recent "Second Skin"). Zed1 moves, through a fine dance of shapes and colors, in a post-modern surrealism that, even in its most irrational features, refers to a clear awareness, sometimes melancholy, sometimes extraordinarily ironic.

Zed1's figures come to life because each of them have their own characterizations. These are enhanced by the sheer precision and elaborate details. His characters are a human marionettes, in which you can found particulars like Bosch and Tim Burton. He doesn't have idols, but he respects a lot of artists like Os Gemeos, Dome, Interesni Kazki and Blu.

His works decorate walls of all those places he had traveled like Italy, Belgium, Holland, Romania, Spain, UK, Norway, Brazil...