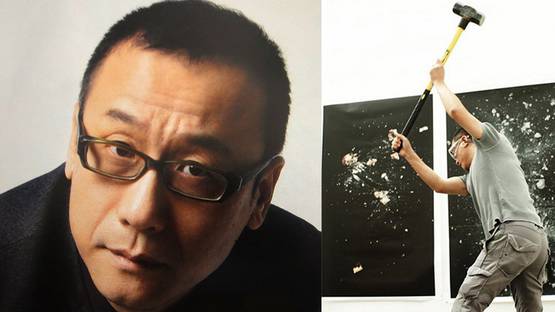 Zhan Wang is a contemporary Chinese artist. Primary, he is a sculptor; but also known in other art forms such as installations, photography and video. Many of his works include the use of simplistic object that serve a purpose of telling a complex idea.

Zhan’s art education started at an early age, from brush painting lessons by his grandfather and sketching lessons by his uncle, to the endless games of brick building (which foreshadowed his later urban landscape series).

He went to the Central Academy of Fine Arts, where he studied in the Sculpture Department. Zhan spent his entire college years in the atmosphere of the 85 New-Wave Movement. Between his Realist training at the Academy and the Modernist influences that came from exhibitions, conferences, and sensational events, Zhan started developing his own style.

Zhan’s pieces consist of conceptual ideas where he “embraces and subverts several other major traditions in modern art, both Chinese and Euro-American”. Many of his ideas that are expressed through his works pertain to Chinese culture.  Zhan concentrates primarily on abstract forms, which he calls floating stones: large, highly textured rock-like pieces coated in chrome. They are also called mountain or scholar's rocks. In the Chinese culture, the rock holds a high value; rocks have been thought to possess the purest qi, or vital energy, and collected as objects of art and tools of meditation.

In his 1990 Sidewalk series, Zhan tried to break from the sculptural tradition of depicting only religious or heroic figures, by choosing the most common people on the sidewalks as his subjects. He used painted resin as medium instead of the traditional monochrome bronze and marble, and covered these life-size sculptures with real clothes, before painting them.

Later, Zhan started experimenting on more Conceptual sculpture, producing a new series The Mao suit –he used a stiffening agent to permanently mold Mao suits into such shapes to imply a contorted body within.

The same idea of emphasizing the “shell,” instead of what’s underneath, was carried on in the artist’s most well-known series, Artificial rock, the first Chinese Contemporary sculpture to be collected by The Metropolitan Museum, and stimulated many performance pieces by the artist in the following years.

In 2004, Zhan scaled Mount Everest and placed one of his own sculptures at the summit. For his "On Gold Mountain" exhibition at the Asian Art Museum, located in San Francisco, in 2008, he used rocks selected from the foothills of the Sierra Nevada to create his sculptures, alluding to the nineteenth-century Chinese immigrant experience of mining gold during the California gold rush.