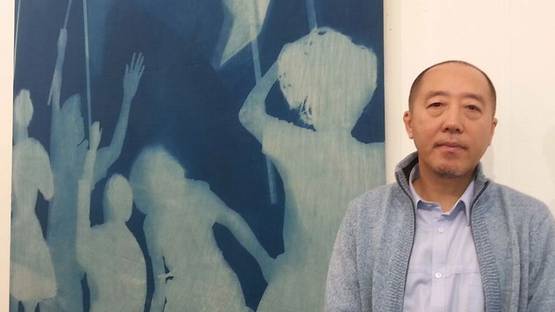 Zhang Dali, also known as 18k and AK-47, is a Chinese artist who works in a variety of media. A provocative mix of graffiti, photography, and sculpture, his art highlights the rapid social change that has swept and unsettled China.

Zhang Dali was born in 1963 in Harbin, an industrial city in Heilongjiang Province, in northeastern China. He studied at the Beijing Academy of Art and Design. After finishing school, he traveled to Italy, where he discovered Graffiti Art. In the 1990s, he was the only Graffiti artist in Beijing. Zhang became known for the 2,000 giant profiles he created of himself - completed between 1995 and 1998 - seen throughout Beijing. The profiles of his bald head were intentionally placed alongside chai characters, which were painted by city officials as a way to indicate demolition. These images became subject of a media debate in 1998.

Zhang is interested both in the political ramifications of these alterations and the delicate artistry the censors practiced in their adjustments of the historical documents.

In his ongoing project A Second History, Zhang acts as an archivist of sorts, locating images in Chinese archives - books, periodicals, and other publications and print media - and researching their history. His work uncovers the role of photographs in state propaganda during the regime of Mao Zedong, documenting the retouching, coloring, and other changes - such as the removal or addition of people and pictorial elements - made to photographs by state censors.

Chinese Offspring is one of Zhang's best known works. Consisting of 15 cast resin figures suspended from the ceiling, each sculpture is a representation of a migrant construction worker, a vast underclass who contribute to the modernization process at it most visible level. According to the artist, immigrant workers who have traveled from the rural areas all over China to earn a living in construction sites in Chinese cities, are the most important members of the Chinese race, who are shaping our physical reality. From 2003 to 2005, Zhang has portrayed immigrant workers in life-size resin sculptures of various postures, with a designated number, the artist’s signature and the work’s title Chinese Offspring tattooed onto each of their bodies. They are often hung upside down, indicating the uncertainty of their life and their powerlessness in changing their own fates.

Zhang Dali has exhibited at museums and galleries worldwide. He has recently shown at the Saatchi Gallery in London, the San Francisco Museum of Modern Art, and at the Ullens Center for Contemporary Art in Beijing. For the UCCA show, Christian Dior and Chinese Artists, he created a fabric-like portrait of designer John Galliano from a repeating pattern of his tag, AK-47, a sly variation on his paintings from the Slogan series.