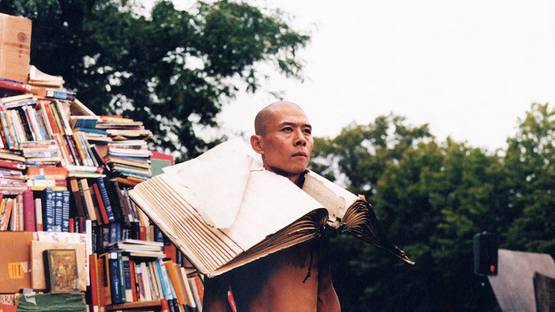 Zhang Huan is a Chinese artist known for his physical and psychological endurance performances in the 1990s. His recent work has featured sculptures and paintings that explore themes of memory and spirituality and how these relate to Buddhist practice.

Zhang Huan was born in An Yang City, He Nan Province, China. He received his B.A. from Henan University in Kaifeng (1988) and his M.A. from the China Central Academy of Fine Arts in Beijing (1993). Zhang began his work as part of a small artistic community, known as the Beijing East Village, located on the margins of the city. The group of friends from art school pioneered this particular brand of performance in China and Zhang was often reprimanded by officials for the perceived inappropriateness of his actions.

His issues are the traumas of a nation emerging from the brutality of the Cultural Revolution, famine, political repression, ideological zeal, the place of censorship in contemporary democracy and the hardship of everyday life in China. Several of his performances were banned by the Chinese government in the 1990s.

Before moving to the United States in 1998, he had gained a considerable reputation in Beijing due to the provocative nature of his performances, particularly those in which maltreated his own, nude body testing physical and mental endurance.

While he considered himself a Buddhist, it was only after his trip to Tibet in 2005 that his works showed a strong reference to the religion. Inspired, he created giant copper hands and feet, magnified versions of fragments of broken Buddhist figures that he found in Tibet.

He is considered as one of the most vital, influential and provocative contemporary artists working today. The layers of ideas this artist explored in his early performance art, were made out of existential explorations and social commentaries, and have carried through to the more traditional studio practice he embraced upon moving to Shanghai in 2005, after living and working for eight years in New York City. He established Zhang Huan Studio, where he continued to expand his artistic works, creating new forms and expanding into new areas. The ash painting technique he created has added another method of painting to art history, other techniques, such as sculpting in cowhide, door carvings and feather woodcuts have all been pioneered by Zhang Huan.

Paying attention to the spirit and future of humanities, Zhang Huan is dedicated to the extension of boundaries in forms and subjects of oriental and occidental, past and present art creation.

Currently, he lives and works in New York and Shanghai.