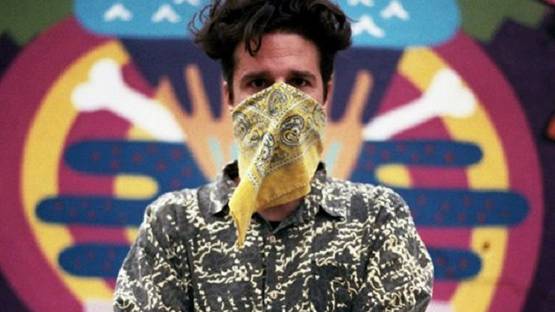 Zosen Bandido is Barcelona - based artist who creates his proper mythology, flooding walls and canvases with fantastic characters that reveal his commentary on the happenings of our own world. Filled with neon colors, geometric patterns and symbols, Zosen’s paintings immerse the viewer in their vivid imagery. Zosen was born 1978 in Buenos Aires, Argentina and finished the Llotja School of Art and Design in Barcelona.

An active member of the Barcelona graffiti scene since the early 1990s, Zosen continues to produce projects that carry the anti-authoritarian spirit of his early days in the punk and do-it-yourself movements. After immigrating to Barcelona from Buenos Aires as an adolescent, he began to experiment with different graffiti styles, combining social criticism with amusing characters and letters. In 2001 he became a member of the celebrated crew Ovejas Negras (ONG). Though the crew has disbanded, he continues to collaborate with its former members as well as artists of different disciplines from around the world.

The influences of skateboarding, fanzines and street culture permeate Zosen’s contemporary work, both on the street and in the studio. His murals bring color and spontaneity to the austere gray of the urban landscape of Barcelona as well as many other international culture capitals. But despite their playful aesthetic, Zosen’s paintings speak out against the social injustices he perceives. The multi-colored, two dimensional characters, though naive at a first glance, criticize the corruption of today’s society. Folkloric elements combine with the excesses of post-modernity, creating a new vocabulary of symbols.

While Zosen paints on the streets frequently, his repertoire has expanded to include performance art, printmaking, illustration and fashion design. He has shown his work in galleries in Europe, the Americas and Asia and is the co-founder of the clothing label "Animal Bandido". Relentlessly creative, Zosen constantly invents new artistic projects and urban interventions.

Zosen also has a partner Mina Hamada and together they made crew of two visual artists based in Barcelona, one from Argentina and another from Japan. Their passion for colors and free forms led them to collaborate on murals of various formats. The artistic repertoire includes murals, paintings on canvas, illustration, screen printing and handmade books. Their work together can be found in several European, American and Japanese cities.

The last Zosen's exhibition was "City Limits", an art project with Mina Hamada. During their three week February residency at Islington Mill, Zosen and Mina have been exploring and navigating Salford and Manchester’s landscapes, to create a map of City Limits, a new vision of public spaces. Embracing their situationists ideas, this map breathes new life into neglected public spaces and disgarded objects with  inspired series of collaborative colorful and vibrant D.I.Y interventions.

Zosen lives and works in Barcelona.