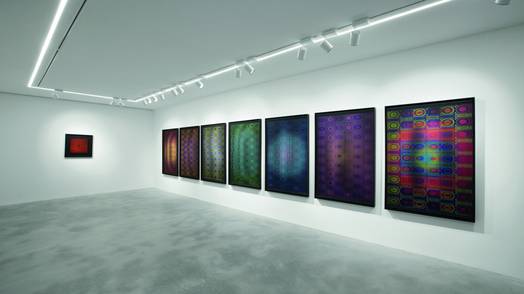 The exhibition “Alberto Biasi - Light Visions. Visions of lightness, visions of light” opens on Tuesday, 11th October 2016 at Dep Art Gallery in Milan.
Through 35 works that retrace the main phases of the artist career from 1960 to nowadays, this solo exhibition intends to document the vitality of the object-research of this undisputed protagonist of European art and to act as an ideal counterpoint and complement to the exhibition currently on show at Palazzo Preotrio in Cittadella (Padua), dedicated, instead, exclusively to its parallel environmental and immersive works.
The exhibition is on until 17th December and includes significant works representative of the different phases of Biasi's research - Trame, Rilievi ottico-dinamici, Oggetti ottico-dinamici, Forme dinamiche, Interferenze dinamiche, Politipi – plus two new works created specifically for the Gallery space: a Politipo and a sequence of Gocce.
The title of the exhibition, "Light Visions", must be interpreted in its intentional ambiguity (the word light, in fact, recalls both the noun and the adjective) and it refers to “light" as an element always characterizing the creativity of the artist, but also to another fundamental element of his work which is the physical and ideal “lightness” which has always identified his poetics and realizations.
Biasi took his first steps at the end of the Fifties - in a context where he immediately started to dialogue with the emerging situations of Azimut and ZERO – moving from a vision of zeroing the surface that brought to the redefinition of the very statutes of ' image', in particular through the employment of new techniques, free experimentations of materials and structures, and researches of interaction between artworks and viewers. The artist preferred a rational and systematic vision of the artistic action, conceived as an instrument of knowledge of the elementary coordinates of human experience such as seeing and moving.