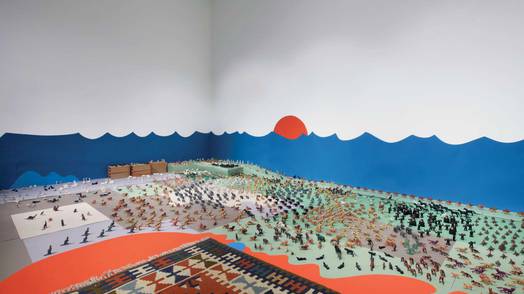 The exhibition “Alighiero Boetti. The Fantastic World”, in program at Milan’s Dep Art Gallery from February 28 to May 26, 2018, consists of some thirty works on paper starting from 1965. The selection includes those described as those of his "own hand" (thus, not realized with the collaboration or the entire work of others) and a large installation
from 1979 that until today has never been repurposed.
The presented works exemplify that for Alighiero Boetti, marking and drawing were the equivalent to tracing a mapping of an imaginary world, completed with the most different stylistic figures, often with classifying hints of modalities and subjects, which repeat themselves and fuse together, blending, multiplying and aggregating.
These papers are more and more extensive or multiplicable. Indeed, Alighiero Boetti’s papers often indicate a writing, reporting, collage or tracing prevalence; however, just as often, they reveal the dominance of painting.
In fact, the works in exhibition are neither blueprints nor preparatory drawings, but present themselves as paintings to all effects. Structured, constructed and well-defined, the exhibited works reveal one of the lesser known aspects of the artist: he was an exceptional painter.
Curated by Federico Sardella, the exhibition opens with an Indian ink on paper (1965), from the artist’s earliest creative period, and continues with an in-depth study dedicated to one of Boetti’s favorite themes: nature revisited and the animal kingdom. From the 1970s onward, this theme occupied a significant part of the artist’s attention. It strongly differentiated his production in the 1980s to the point where it characterized the period. Monkeys, panthers, dolphins, frogs, mountain goats, turtles and other creatures of the animal world take form in Boetti. Thanks to Alighiero Boetti, they are reborn, and are decorative elements that can be repeated indefinitely, and, such as numbers, they can be combined without limitations.