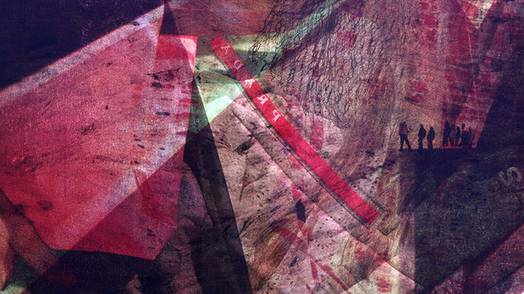 
The exhibition “Watchin´ Windows” consists of a collection of three artworks and a selection of record sleeve artworks by Berlin-based artist und curator Sebastian Häger. The first official artist to exhibit at the gallery in 2006, he has, over time, honed an unfluctuating and characteristic visual style which, in light of its special technical approach and aesthetics, is unique. His works depict the bizarre world concealed between the layers of paper utilized in his work process.

By sampling and merging different image sources and, by means of analogue interventions, his works function similarly to hypertexts. Figurative elements enter into connections, they point to something that creates an enriched frame of reference and the notion of a third space, which brings about a peculiar hovering between the logically reconstructable original contexts. Häger’s works form a vortex of sorts, whose suction swallows up the consciousness of the beholder, but simultaneously regurgitates an infinite series of reflections. In their stratification, his works visualize not just the endless, empty space of perspective or the void of the unmarked space, the blankness or chaos of potential, out of which images emerge - they attempt to blur the relation between reality and illusion.


Watchin', windows
Wonder, if he knows
What it, could be
If it's, meant to be

Watchin', windows
Do they, know what I know?
Silently, I'm away, I'm away