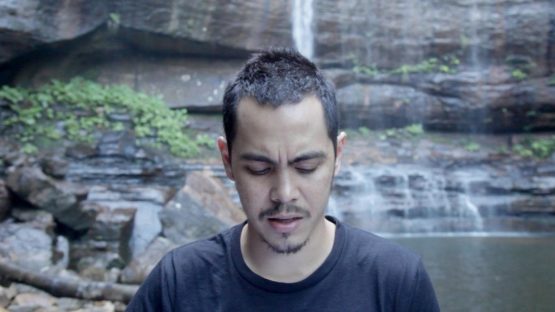 The work of Abdul Abdullah is shaped by the strong political discourse and yet visually appealing executions. Namely, the matters of identity, race, and homeland are meticulously articulated through several different media spanning from painting, over photography to installations. By employing the stereotypical imagery, the artist wisely dissects the mechanisms of hatred and all of its hidden layers. Therefore, Abdullah attempts not just to question his own identity, but to warn the observer of the consequences of any form of segregation which is in accordance with contemporary global social and political circumstances.

Abdul Abdullah was born in Perth in 1986. He comes from the family of mixed Australian-Malay heritage. Interestingly, one of the artist’s ancestors was a British convict who arrived in Australia in 1815, having stolen two stamps and a watch chain in London, while his mother is Malay and his father converted to Islam in 1972, adopted an Arabic name and raised Abdullah as a Muslim. From 2006 to 2008 the artist studied at the Faculty of BEAD, the Curtin University of Technology with BA in Art and from 2015 to 2017 at the UNSW Art and Design with the degree of Masters by research.

Deploying the themes of themes of belonging, alienation and multiculturalism

The Matter of Origin and Acceptance As the Main Subject

The artist’s starting point is embedded in the continued feeling of being an outsider among outsiders. The decision to become fully dedicated to socially engaged art is related to the often anxiety and frustration Abdul was exposed to due to being a Muslim. His works reveal an intimate atmosphere and need for teasing out the conflicts of mixed race with tenderness and poignancy. In a practice that continues to evolve across new subjects and mediums, Abdul Abdullah remains committed to exploring the beauty, the complexity and the challenges of identity in order to express bold statements aimed for deconstructing labels and cliches.

The ape masks are undermining the racial stereotypes

The outstanding portraits of Abdullah reveal a close and intimate connection with his subjects and reflect the artist’s bold determination for opening controversial issues. In his Siege series of photographs created in 2014, Abdullah questions the problems of youngsters who are experiencing stigmatization on daily basis. By drawing visual cues from the documentation of the 2011 London riots and news footage of the 2010 Arab Spring, the narrative of this work reflects the disorientation of a generation under fire and is a theatrical portrayal of loss and emotional volatility. With the work Homeland, Abdullah processed the stereotypes differently through the photographs and paintings to point out how identity is misinterpreted in contemporary culture.

The art in service of spreading awareness

The latest exhibition of Abdul Abdullah symbolically titled Burden critically deals with moral justifications which were used to validate examples of contemporary imperialism. On the same trail as with his earlier works, the artist is interested in how the Western media are constituting the image of the Others, whether those asylum seekers or provisional workers or any other group of the Third-world origin. The paintings are in accordance with contemporaneity to the core and are combination of fine portrayal and graffiti look alike emoticons. In order to cynically express the absurdity of racism respectively modern day fascism, the artist paints his friends and Malayan relatives with either sad emoticon or a scratch over their eyes, whilst the soldier’s portraits are covered with smiley emoticons.

Abdul Abdullah has been short-listed three times for one of Australia’s most prestigious art awards – the Archibald Prize. His work has been included in several important collections, such as National Gallery of Australia, Art Gallery of Western Australia, Islamic Museum of Australia, University of Western Australia and private collections in the United States, Australia, and India. With his politically charged art practice, Abdul Abdullah cynically extrapolates an examination of universal aspects of human nature, coming from a standpoint of deep understanding and empathy, not only for one particular ethnic group but rather for the global majority of colonized people.