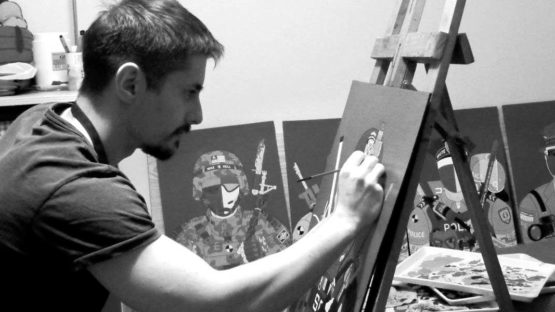 Aleksandar Todorovic is a Serbian artist whose oeuvre is so far politically and socially engaged. He explores the many forms of Evil, present in our everyday life, using mostly the character of the politician to depict the evil that is inside us all – the greed, materialism, lies, deceptive politics, corruption, and many, many more bad characteristics.

Born in 1982 in Belgrade, Serbia, Aleksandar earned his master degree at the Faculty of Fine Arts in Belgrade, Serbia, in 2007.  He is the member of ULUS (Serbian association of visual artists) and he also has accredited status of Independent Artist, since 2011. So far, he had more than 30 exhibitions, both solo and group, and many more are expected in the following years, mostly abroad.

The central character of Aleksandar’s art poetics is the character of the politician. He is the archetype of evil, the obese, blind, pale-skinned, bald and gluttonous individual in a black business suit, a pure greed in human form. He is portrayed practically in all of his personal works.

“Living in Serbia during the 90’s I have seen the collapse of many moral and citizen values – the former Yugoslavia broke down in a bloody civil war. Growing up in a society where the politics is ever-present I became interested in it, so I started making my own art inspired by it.”

Other archetypical characters are also presented to some extent, like the character of a bureaucrat, of ordinary working man, of model and other human types. In his personal art, Aleksandar  frequently uses illustration style techniques. Popular culture, from movies to video games, illustrations and comic, inspires him greatly.

“I also use caricature, irony, sarcasm and politically incorrect humor in my works. I started exploring the evil, the roots of it, how it begins and how it evolves, trying to make detailed studies of it in my works. Modern world with all its complexity inspires me. I believe that art can inspire people to be better and to do better- art can change the world, one viewer at the time. By exposing the truth, the objective reality as I see it, I hope that at first it can make people laugh, and then make them think and ponder over the message which I am trying to tell.”