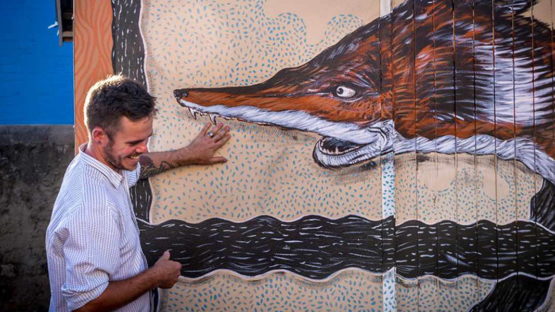 Andrew Frazer is an Australian artist. He is a full time illustrator, hand letterer, designer and artist that ignites the imagination through his thought provoking characters and narrative based art.

Based in Bunbury, Western Australia, Andrew has previously lived and travelled extensively which provided him with an eclectic and inspiring pool of influences that are evident through his art. With a passion for story-telling, Andrew’s art often engages the audience on a very personal level welcoming the viewer into a conversation that discusses shared human emotions such as pain, hope, despair, redemption and contentment. Andrew’s ever growing national and international cliental base has seen him work with a variety of individuals and companies such as Corbis, Custard Co Cider, Machéll Design, The Walkley Foundation, FORM and Magnesium Media. Andrew is also the Founder and Creative Director of Six Two Three Zero that runs the annual Bunbury street art project Re.Discover.

From commissioned murals both within and beyond Australia his unique style blend of whimsical characters and hand lettering has carved a fresh path of desire from the international community. With Andrew’s art spanning from wedding invitations, commercial branding, private commissions, public murals all the way through to his first illustrated children’s book, the future looks bright and full of possibilities for this young Australian artist. From his first solo exhibition in Perth in 2010, titled Bat Cave Shenanigans, Andrew held numerous solo, and participated in group exhibitions, like Slow to Speak, Waterloo in 2012, Reclaim, NYC in 2012, Artcetera, Elora in 2013, Three Word Advice, Mt Lawley in 2013, Re.Discover, Bunbury in 2014, South West Survey, Bunbury in 2014, 6YL Instinct, Melbourne in 2014,  PUBLIC Salon FORM, Perth in 2014 and Reflective Sugarman, Margaret River in 2014.

Andrew currently resides in Bunbury with his wife Drea.