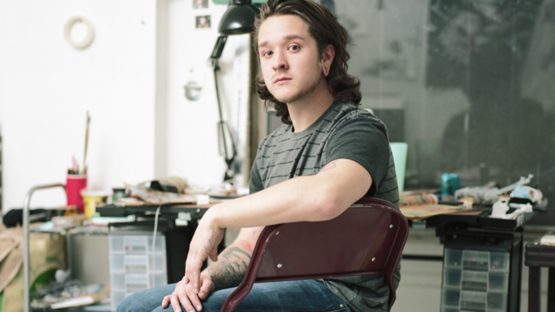 Caleb Hahne is an American illustrator and artist. His practice involves the utilization of technology and traditional techniques by confronting the allure of a blooming cyber media. Intrigued by the concept of remixing, he integrates traditional means of art making with a contemporary approach by digitally collaging appropriated imagery from textbooks and magazines and then drawing the new compositions. His current body of work involves the material engagement of digital collage, found paper and objects, graphite, ballpoint pen, oil paint, and acetone along with other mixed medias.

Caleb Hahne was born 1993 in Denver, Colorado and just recently become Bachelor of Fine Arts. According to Caleb, college taught him what he didn’t want to do, it forced him to try new things and allowed him to diversify his practice: “There are a few instructors that showed me specific techniques, but I mostly learned from a lot of studio time and copying old masters work. ”

Hahne grew up with graffiti and he has always been inspired to make stuff. A lot of works he is making are actually illustrations of questions that he is dealing with that spawned from literature. Books like 7 Dada Manifestos and Lampisteries, The Broken Frame and The Poetics of Space, are some really good books that he has been reading lately that gave him a conceptual framework to work around. Aside from that, he is interested in the infinite death of the sculptures.

“Mocking life while imitating figures in a relatable, distant, and monumental state is what haunts me, and I love it.”

Caleb Hahne started taking drawing seriously few years ago, but only recently he is a full-time artist trying to make it a full-time career. First, he started as a collage artist, he wanted to expand on the practice of appropriation so he began drawing the montages he assembled. He was interested in mimicking the collages, but now they have evolved into more mature contradictions. He lays down a line drawing of the collage, and from there he starts to throw other intervals into the equation: “I’ve been using the word vulnerability a lot in my work and what I mean by this is allowing things to happen in the process and to avoid complete control. It’s nice to leave things unfinished, throw some paper on it, cut things out, so-on-and-so- forth.”

Hahne’s mixed media works on paper demonstrate an incredible talent and skill that is clearly cultivated and informed by a strong understanding of design and art history. With fine attention to the juxtaposition of softness and hardness, his works combine and contain separate components in a balancing act of adding and subtracting until an aesthetically pure whole image emerges.