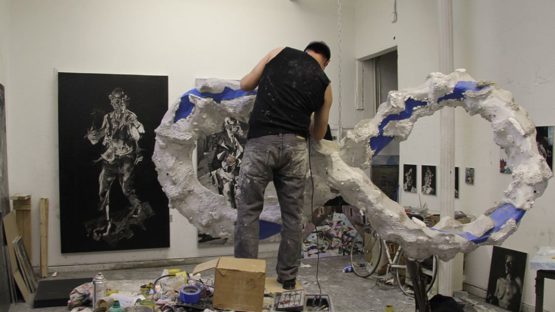 Chambliss Giobbi is an American artist, known for his photo collage-based works and sculpture. He was born in New York City in 1963. Before shifting into the field of contemporary visual art, Giobbi went to Boston University and earned his BFA in Music Composition and Theory in 1986. He began composing classical music at the age of 17, and at the same time, made collages. Eighteen years later, after a Guggenheim Fellowship and nomination for the Pulitzer, the prolific composer stopped composing and became a full-time visual artist.

In 1991, he received the New York Foundation for the Arts Fellowship, and five years later a Guggenheim Fellowship. He had four solo shows, two at 101/Exhibit in Los Angeles, California and two at MiTO Galeria de Arte Contemporaneo in Barcelona, Spain. His work was exhibited in group exhibitions in Barcelona, Bucharest, London, Detroit, New York and Miami, and is held in the permanent collection of the Museo De Bellas Artes in Santander, Spain and International Collage Center in Milton, Pennsylvania.
He has been featured in publications such as BOMB Magazine, SLEEK Magazine (Berlin), FlashArt (online edition) and The New York Times.

Chambliss Giobbi’s figurative collages are created after a long photo session with his subject and printing out thousands of photographs, which are later torn and glued, piece by piece, to create the image. After that, he makes a series of collages on panels – some are flat and some are sculpted to create three-dimensional surfaces. They are psychological and physical mutation and the evidence of a long relationship between the artist and his subject.