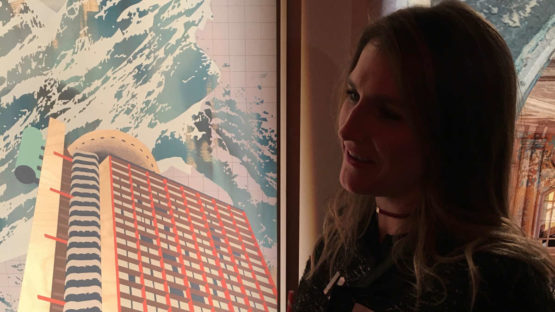 Emily Moore is a Scottish artist interested in the patterns and forms found within mountainous environments and the contrasting, architectural structures which inhabit them. Her paintings attempt to explore the tension between these two conflicting themes, looking to strike a balance within the final composition.

Landscape has always been a primary source of inspiration for Moore. Her work is created using an amalgamation of personal images, usually photographs taken to record her travels. Each body of work is a documentation of those experiences, the creative process allowing Moore to recall each place and combine them to create new, anonymous landscapes.

The physical act of creating a piece, the surface and materials, has always been an important part of Moore’s practice. She works directly onto birch plywood panels, often leaving areas of the raw wood exposed. Moore experimented a lot with screenprintng during her time at Edinburgh College of Art and throughout a semester at Massachusets College of Art and Design.

Since then Moore developed her own process, using masking tape and a scalpel to create the layered, tonal images similarly achieved through printing. Moore often uses an overhead projection for the intricate, detailed images, which are then drawn and cut-out by hand. A laborious process which allows her to combine the precise, detailed layers over the rough, painterly ones.

Since graduating Moore has shown her work internationally as well as regularly exhibiting at the Annual Royal Scottish Academy Open Exhibition. In 2016 Moore won the Royal Scottish Academy Guthrie Award and in 2018 was shortlisted as one of twenty-six global finalists for the Rise Art Prize where she was awarded Rise Art Painter of the Year. Later in 2018 Moore was announced as a finalist for the Zealous Emerge Art Awards and was also long-listed for the Aesthetica Art Prize.