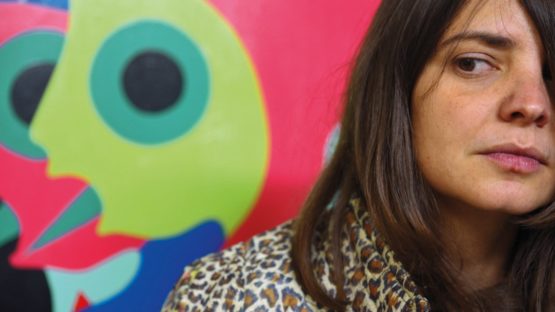 Gio Pistone is an Italian artist, known for her colorful paintings and drawings on paper and walls, inhabited mostly by strange and charming creatures of her imagination.

Born as Giovanna Pistone in 1974 in Rome, Italy, she began drawing at an early age, first with crayons on the walls of her bedroom, and then those of her nursery school with buckets of paint. Not taking the predestined artistic path, she studied psychology but soon abandoned it, suffering the enclosure of university and libraries. Afterwards Gio tried her luck in set design and performance, working as a scenographer at the theater. She didn’t limit herself to only one art, but she tries to work on more perceptive levels. Consequently, she finds in the contemporary theater the perfect union among music, painting, sculpture, writing, video and murals. Her decision to dedicate herself to drawing came later, as Pistone herself states that she ‘decided in the end that in life the greatest I would have to bear would be the weight of a pencil and the eternal of my mind’.
She belonged to the Roman hard-core-punk scene and she participated in the first forms of TAZ and illegal parties in abandoned factories in the 1994.

Gio’s highly imaginative mind brings to life unknown worlds, strange creatures, a surreal atmosphere full of meanings, colors, eyes, legs. She has the rare ability to blend colors managing to make harmonic tones seemingly light years away from each other. Staring at Giovanna’s art makes you look twice, searching for details and enjoying the colorful and dark scenario she portraits on walls, canvas, wood, and also sculptures. Unusual atmosphere and weird characters of her art came from her love of animals, nature and books of mystery and surreal worlds.

Her murals appeared on several walls in cities such as Rome and Ancona, populated with characters whose names are Albino, Olione, Collatesta, and many more. She describes her street work with a sentence ‘when I am in front of a wall with the idea to draw, I see it’s marks and light effects, and I am reminded of something immediately – it is a dialogue between me and the wall.’

Projects and collaborations of Gio Pistone

In 2004, Gio found together with Susan Campana and Camilla Falsini Serpe in Seno collective of illustration. The collective publishined illustrations in children’s books, national magazines and advertising campaign. In 2013, together with Nicola Alessandrini, she enriched walls of an exhibition space dedicated to art in the House of Architecture in Rome. She has participated in Festival as Scala Mercalli (Milan), Pop-Up (Ancona), Lumen (Naples), Alterazioni (Arcidosso), Visione Periferica (Mosciano Sant’Angelo), M.U.Ro. (Rome), and to the projects like LUCE è Diversità in collaboration with Acea and Wunderkammern Gallery in Rome and at the Maam, Museo dell’Altro e dell’Altrove in Rome.

Gio Pistone lives and works in her hometown, Rome.