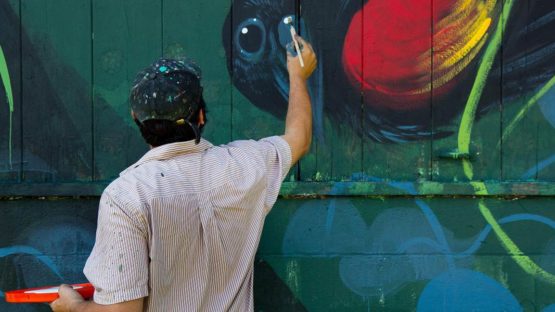 Hitnes is an Italian street artist, muralist and freelance illustrator born in 1982, best known for his nature-inspired murals. Born in Rome, Hitnes grew up in a family of scientists, in an environment which accounts for his early interest in biology and the natural world. Nonetheless, art was a call where he found his true inspiration.

Since 1996, Hitnes established himself as a prominent street artist, and he has traveled the world for his art. His murals can be spotted around the world, in Europe, Mexico, New Zealand, Australia, and China. In 2001 the artist began to participate in various projects, artistic performances, collective and solo exhibitions, in cities such as Rome, Paris, Frankfurt, Adelaide, and Florence.

Earlier in 2015, Hitnes completed a six-piece series of walls in the San Basilio district of Rome, as a part of Sanba Street Art Project. His six-wall display features several birds – a blackbird, a peacock, a duck, and a heron, as well as parrots and gulls.

For his most recent project, titled The Image Hunter, Hitnes retraced adventures of John James Audubon, an American ornithologist and painter, notable for his expansive studies to document all types of American birds. Hitnes traveled through 15 states of the US, from Florida to Ohio, and along the way created large-scale murals of the birds he saw. The artist came up with the idea for The Image Hunter project after encountering Audubon’s original watercolors at the New-York Historical Society.

Over the course of his career, Hitnes has done commissioned work for many public and private clients. The artist also works as a freelance cartoonist, screen printer, story-boarder and illustrator and teaches at the European Institute of Design in Rome where he graduated in 2005.