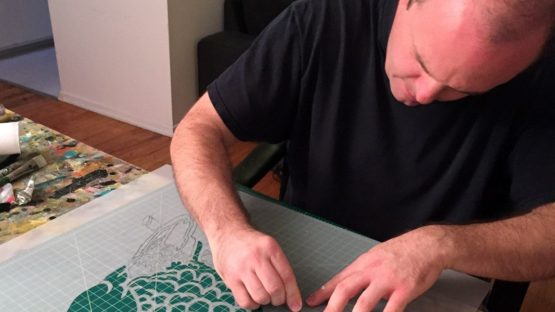 Johnny Taylor is a Los Angeles-based artist known for his bright colored acrylic and mixed media paintings. He uses oil spray paint, screen printing, and stencils on canvas or wood to create his inimitable pieces. Taylor was born in 1971, in Helena, Arkansas and raised in Memphis, Tennessee. Since an early age, he has been influenced by the American humor magazine MAD and the hard rock band KISS as well as by Star Wars. During his elementary school, Johnny used to draw countless variations of these subjects. Aged ten, he was making a comic strip for the local paper on a weekly basis.

Motivated to learn how to paint and develop his own style, on New Year’s Eve of 1992 Taylor resolved to make three paintings per day for the next 365 days. His art is focused on putting acrylic, print, marker, and paint on panel and canvas. He received his BFA in Art History from the University of Memphis in 1996. Taylor’s inspirations are frequently drawn from advertising images and glyphs, as well as from graffiti, murals, hand-painted signs and graphic design, among others. Primarily painted in acrylics with screen printed and stenciled elements, Taylor’s canvases calls to mind the works by Jasper Johns, Robert Rauschenberg, Andy Warhol, Jean-Michel Basquiat and Stuart Davis, as well as the regional arts of the American South.

The Influences and Exhibitions